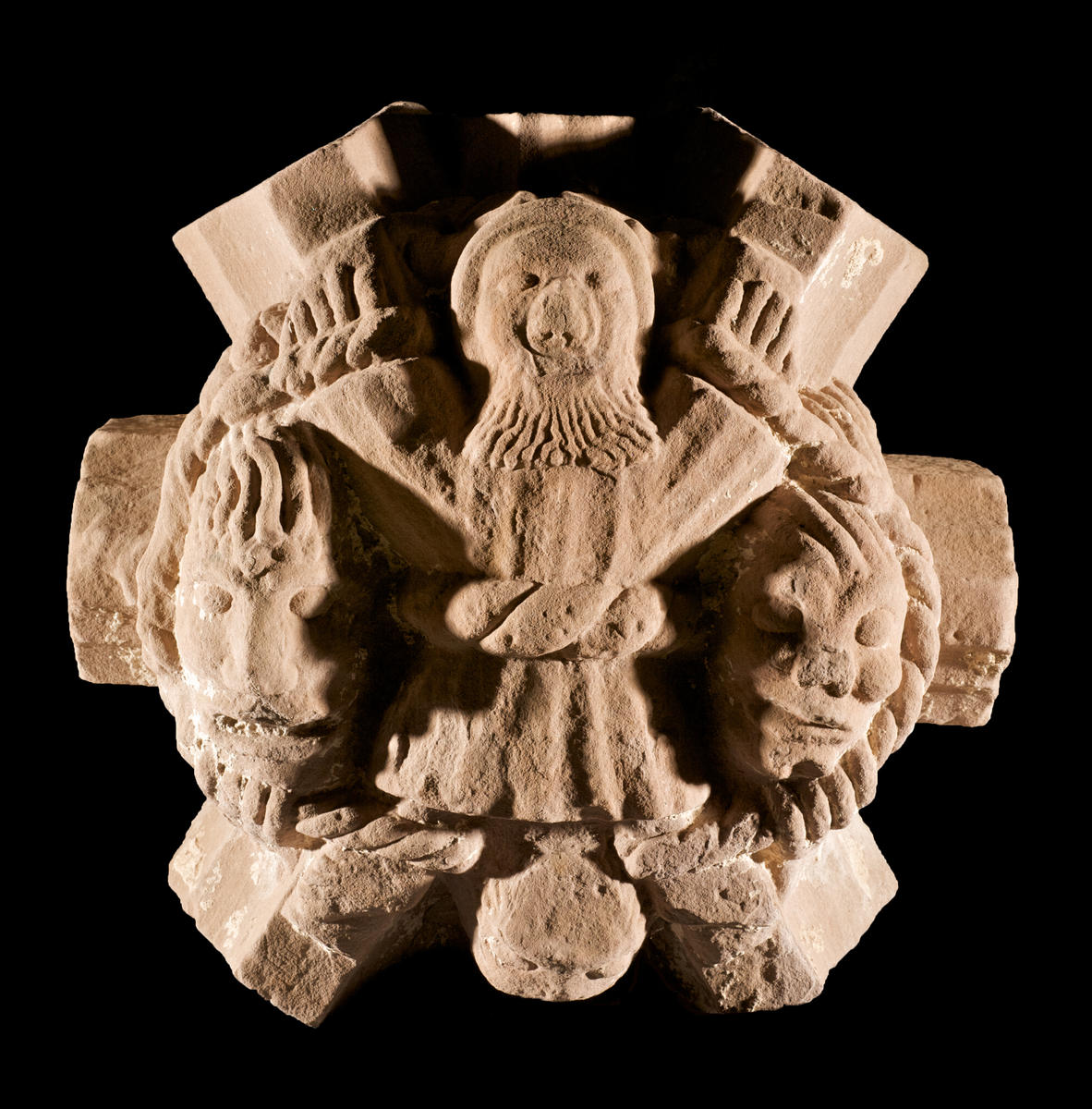 Medieval carved stone vault boss of St Andrew would have been seen overhead at the apex of one of the main vaults at Dryburgh Abbey. Two grotesque heads flank the figure with a rope motif encircling them and running over the wrists and ankles of the saint. A thicker rope is used as a waist-belt. On display at Dryburgh Abbey in the Borders.

The graceful ruins of Dryburgh Abbey nestle secluded in woodland by the River Tweed. Even now, it’s easy for visitors to get a sense of the contemplative life of a medieval monk.

The abbey was established by Premonstratensian canons in 1150. Hugh de Moreville, Constable of Scotland and Lord of Lauderdale, had invited them to this idyllic spot from Alnwick Priory, Northumberland. (Moreville was himself an incomer from England.)

Dryburgh became the premier house in Scotland of the French order, which was established by St Norbert of Xanten in 1121 at Prémontré. Its six Scottish houses also included Whithorn Priory.

Dryburgh was never as wealthy or influential as the abbeys at Kelso, Jedburgh and Melrose, and monastic life was on the whole pretty quiet.

The abbey did suffer four savage attacks, however – the most famous in 1322. Edward II’s soldiers turned back to set fire to Dryburgh having heard its bells ringing out as the English army retreated.

Dryburgh exudes peace and tranquillity. Both the spiritual and domestic homes of the brethren remain largely complete.

The church is a fine relic of Gothic architecture, particularly the warm-pink sandstone transepts flanking the presbytery.

The cloister retains its feeling of privileged enclosure. Its highlight is the 13th-century chapter house – both its painted wall plaster and wonderful acoustics survive.

Other features are the warming house and dormitory in the east range.

Resting place of a Romantic

In the 1700s, the ivy-clad ruin attracted the attention of David Erskine, 11th Earl of Buchan and chief founder of the Society of Antiquaries of Scotland.

Buchan bought Dryburgh House and set about creating a charming landscape in which the ancient abbey figured prominently. When he died in 1829, he was laid to rest in its sacristy.

Sir Walter Scott, antiquarian and novelist, and Buchan’s close friend, was buried here three years later, on 26 September 1832. His tomb is in the north transept (which he called ‘St Mary’s Aisle’).

A third great Scot, Field-Marshal Earl Haig, was interred beside Scott in 1928.

Bats use the magnificent veteran trees and abbey ruins as roosts.

Find out more about Dryburgh Abbey