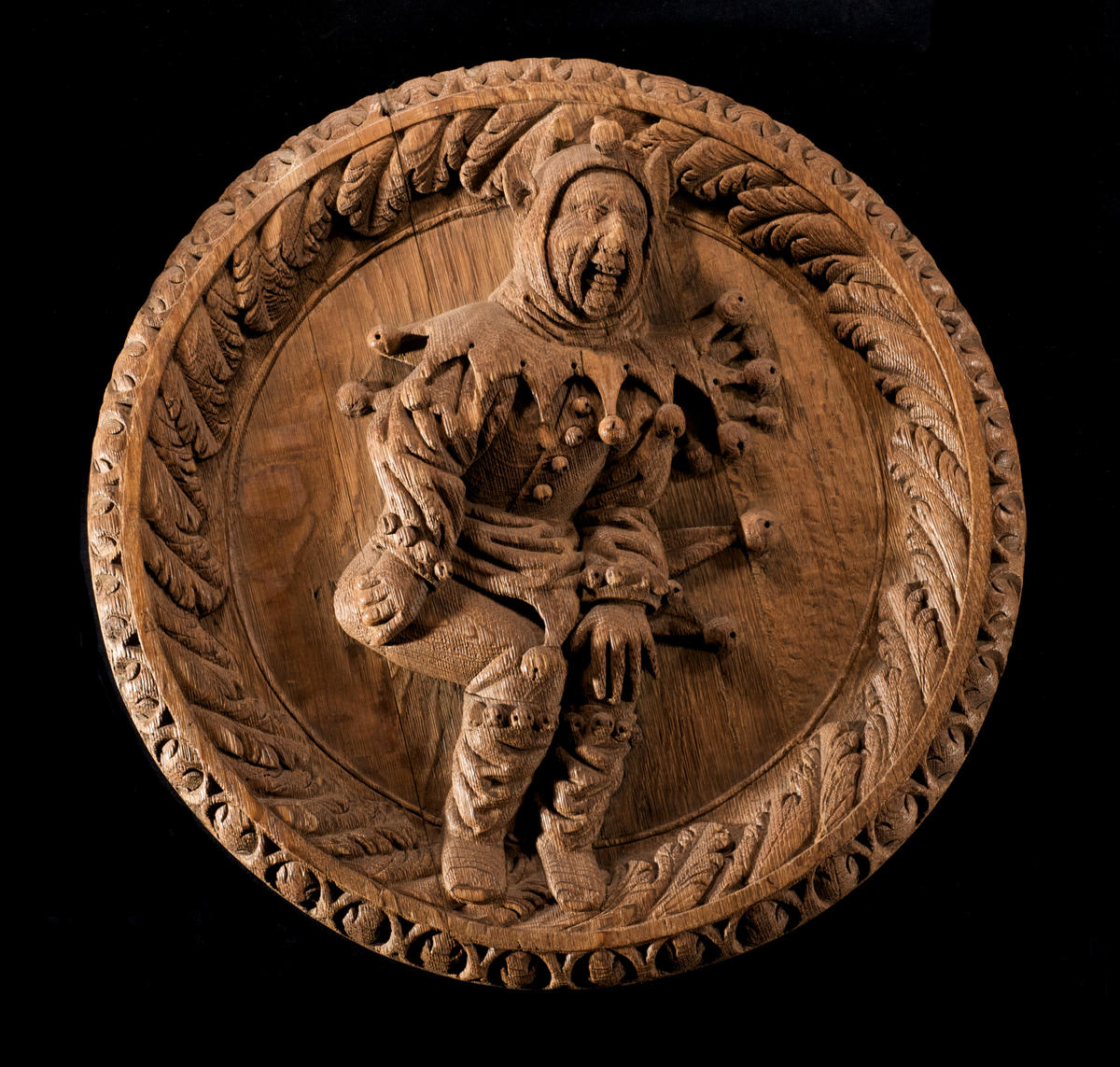 A full-length jester is carved on this oak medallion, part of the famous series of Stirling Heads. He is one of the most recognisable figures of the court of James V and Mary of Guise. King and queen each had a jester, who would entertain and listen to the monarch. The jester also had a political role, reminding members of the court of their duties.

The jester is dressed in his unique outfit. Bells and donkey’s ears adorn his close-fitting hood. Bells also edge the collar and the lower part of his costume. He wears knee-length boots.

Made in the 16th century, the Stirling Heads carvings once graced the ceiling of the King’s Presence Chamber at Stirling Castle. Each one measures about a metre across and bears the image of a king, queen, noble, Roman emperor, or biblical or classical figure.

The Stirling Heads are each made of three layers of wood, originally secured only with glue. But most of them are two-ply everywhere but the centre – where an extra board or block has been placed. As a result, the carver was able to model the medallion figure in high relief.

Nail holes visible in the border of this example reveal how the roundels were fixed to the palace ceiling. The Stirling Heads were taken down after a ceiling collapse in 1777.

Stirling Castle has been likened to ‘a huge brooch clasping Highlands and Lowlands together’.

From high on a volcanic outcrop, the castle guarded the lowest crossing point of the River Forth for centuries. Today it remains a great symbol of Scottish independence and national pride.

Stirling Castle was first mentioned around 1110, and many royal dramas unfolded here. Until the Union of the Crowns in 1603, almost every Scottish monarch had either lived in the castle, or been crowned or died here.

A vast amount of historical and archaeological research was undertaken as part of the Stirling Castle Project. Find more detailed information on our dedicated Stirling Castle website. Or view our research as it was published originally on the SPARC website.

Stirling Castle is a complex monument of diverse buildings and spaces added over the centuries.

The three main enclosures within the castle are the:

At the castle’s heart is the Inner Close, a square formed of the principal buildings for royal occupation.

These buildings are the:

Around the Outer Close are the Great Kitchens (early 1500s) and later army buildings.

The Nether Bailey, at the lowest part of the castle rock, houses powder magazines from the 1800s.

Guarding the main entrance from the town are the:

An icon of independence

Throughout the Wars of Independence with England (1296–1356), Stirling was hotly fought over and changed hands frequently.

Bloody battles waged nearby include:

Robert the Bruce had the castle’s defences destroyed to prevent it falling into enemy hands again. It was not substantially rebuilt until 1336, when the English recaptured it. The castle finally fell back into Scottish hands in 1342.

Stirling was the preferred residence of most of Scotland’s later medieval monarchs, and most added something to its impressive architecture.

Scotland embraced the classical ideas coming from Renaissance Europe during the reign of James IV (1488–1513). He spent much time and money making the castle fit for a European monarch – partly to impress his queen, Margaret Tudor, daughter of Henry VII of England.

James V continued this legacy, as he was just as keen to impress his second French bride, Queen Mary of Guise. Their daughter, Mary Queen of Scots, lived in the Royal Palace as a child and was crowned here in 1543.

Later, in 1566, Mary’s own son, the future James VI, was baptised here. The fireworks display that ended the celebrations was the first recorded use of fireworks in Scotland.

In turn, James VI had the Chapel Royal built in haste for the baptism in 1594 of his first son, Prince Henry. A three-day celebration followed, but Henry died before inheriting the crown.

Find out more about Stirling Castle