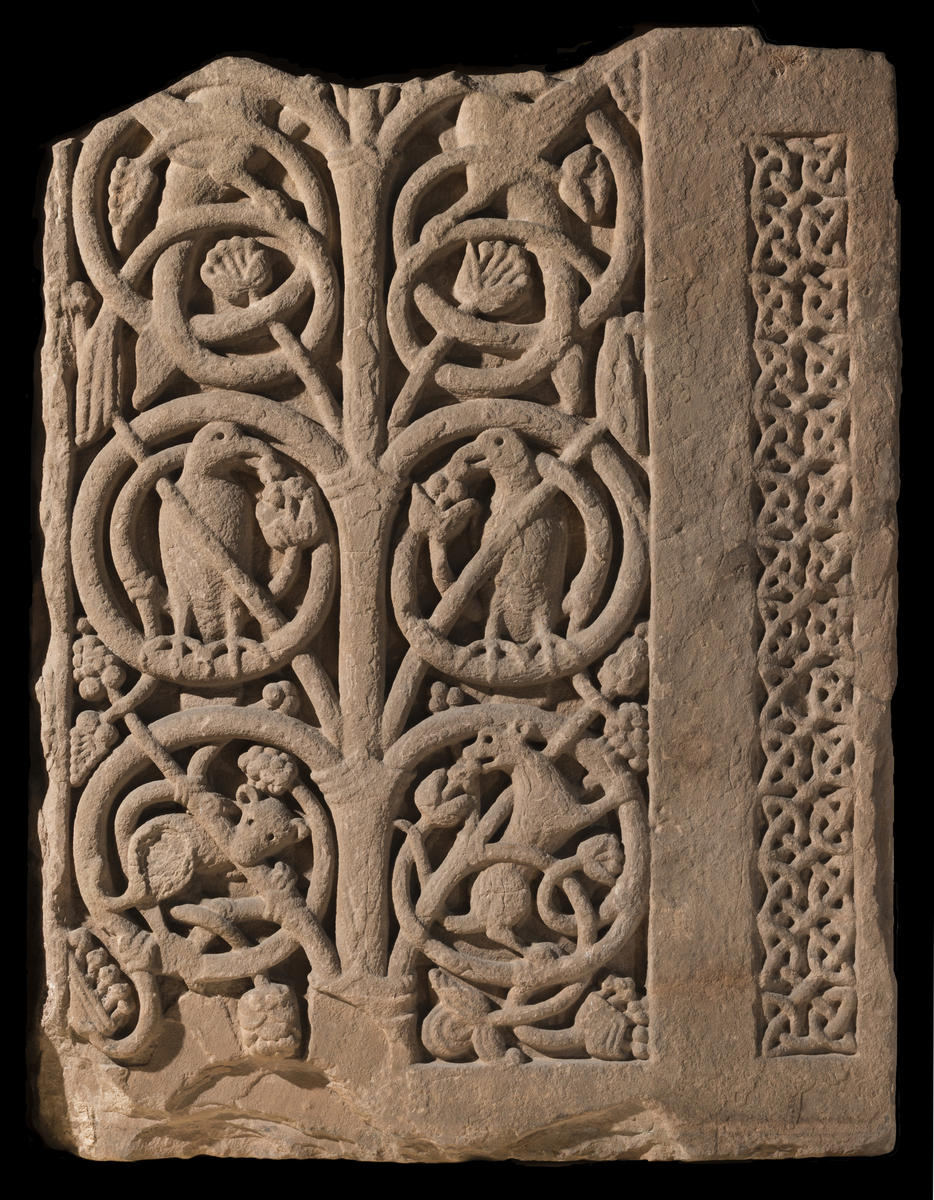 This ornately carved stone panel most likely formed the gable end of an enclosed shrine or sarcophagus (stone coffin) dating from the early 700s. Some think it may have held the bones, or body, of St Boisil, an early abbot of Old Melrose.

The central area is finely carved with vines, in which birds, mice and other animals sit eating the grapes. This design is often found in Anglo-Saxon Christian art, especially Northumbrian sculpture. The panel is very similar in style to the shaft of the Easby Cross, in North Yorkshire.

The left side and upper part of the panel of creamy white sandstone is lost. But a long stretch of wiry interlace work, framed with plain margins, sits to the right of the main design. Similar carving would originally have featured on the left hand side too.

Records tell us that this panel was once used in Jedburgh Abbey as a lintel above the south aisle of the choir. It was moved to the north transept in the 1890s. A smaller fragment, thought to be linked to the panel, was found in the abbey grounds. These two pieces and a third, small fragment can be seen today in the abbey’s visitor centre.

Jedburgh had been an important religious site for 300 years when the Augustinians arrived in 1138. No buildings survive from this earlier period, but many artefacts and archaeological finds give an insight into life before the abbey.

The visitor centre displays some exceptional carved stone fragments such as crosses and a sarcophagus. These date from the 700s to 1000s and are similar in style to Northumbrian work from the time.

Another highlight is the ‘Jedburgh comb’, an intricately carved ivory comb dating to around 1100.

Jedburgh is one of the four great abbeys established in the Scottish Borders in the 1100s. David I founded a priory here in 1138 and raised it to abbey status in 1154. The brethren may have come here from St Quentin Abbey, near Beauvais, France.

Augustinians were priests who for the most part lived a secluded and contemplative life, but also went forth to minister to the people.

Monastic life was largely routine. But the abbey’s border location meant it was caught up in the conflict between Scotland and England in the later Middle Ages. The canons had to evacuate the premises during the Wars of Independence in the 1300s.

The demise of Jedburgh’s monastic life was sealed by:

The Augustinians contributed to royal governance, and their houses could sometimes be found near to royal power centres:

Jedburgh Abbey served the royal castle in Jedburgh. In 1285, Alexander III and his new queen, Yolande de Dreux, were married in the splendid abbey church. Legend says that a ghostly figure appeared before the congregation and foretold the king’s death. Alexander died the following year, after falling from his horse.

David I wanted his new abbey to show his power and authority over the border region – a ‘debatable land’. The abbey still impresses today, almost 900 years later, despite war and weather. The cloister is mostly reduced to stone foundations, but the great abbey church of St Mary the Virgin stands almost complete.

It took more than 70 years to largely complete the building – during which time its status changed from priory to abbey. Architectural fashions changed too – from Romanesque to Gothic.

Building began from the east end, the most sacred part of any church. Its Romanesque features include chunky cylindrical pillars and round-arched windows. In contrast, the nave, begun about 1180, has more delicate Gothic architecture, with its graceful sweep of pointed-arch arcades and magnificent west front.

The abbey church was largely complete by about 1200, but war damage and other misfortunes led to some additions and rebuilding work. The west gable’s great rose window, dating from about 1440, is the most impressive aspect of this later work.

Set so close to the border, and with its royal castle and wealthy abbey, Jedburgh was a tempting target. It was frequently fought over during the Wars of Independence (1296–1356) and again in the 1400s and 1500s.

Edward I stripped lead from the abbey roof in 1305. More destruction followed from the 1520s to 1540s, when English and Franco-Scottish armies fought for control of town and abbey. Evidence of the damage can still be seen. Traces of lowered rooflines and inserted partition walls show where areas of the abbey deemed derelict were separated from those areas still fit for use.

On the eve of the Protestant Reformation of 1560, the abbey housed an embattled and entrenched community.

On display in the visitor centre are works of art associated with the early history of the site and some of the artefacts discovered during the excavations.

The most famous objects are the:

Other finds help to tell the story of daily life in the abbey and include gaming tokens, which show that even monastic life had its lighter moments.

Find out more about Jedburgh Abbey