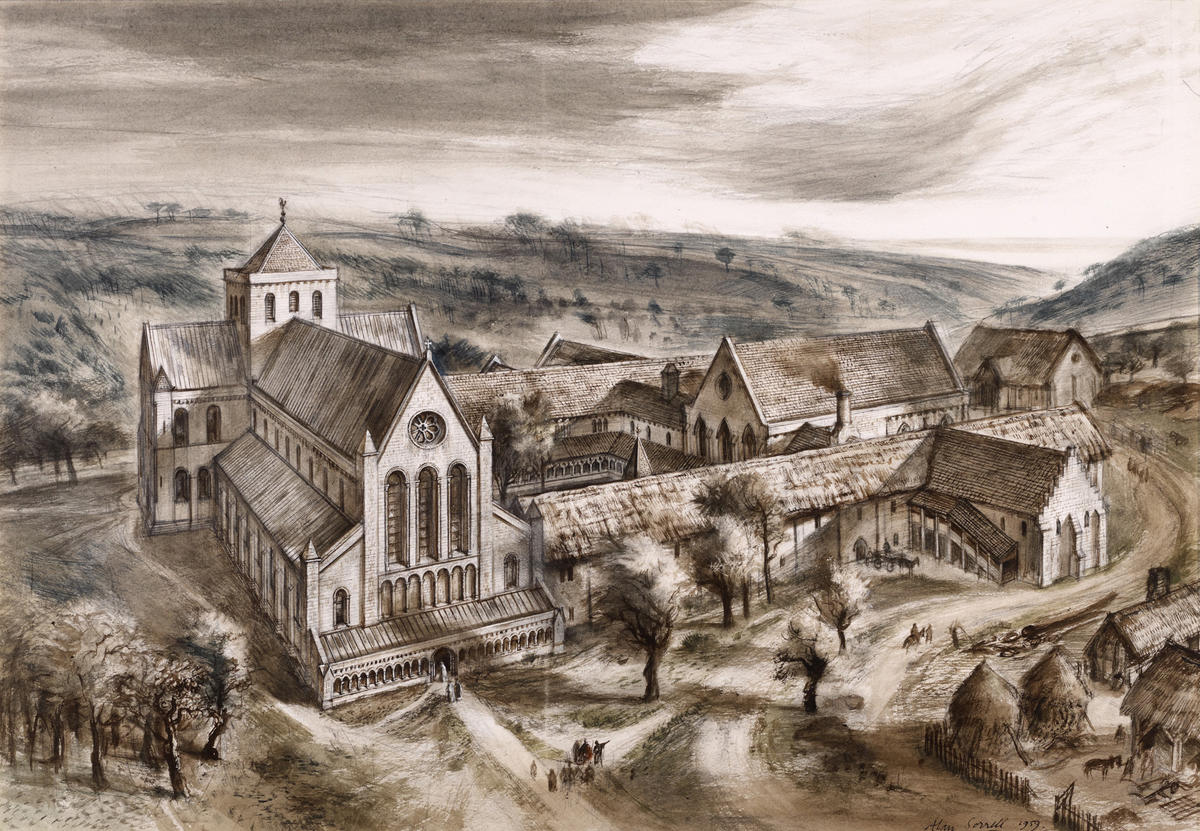 Mixed media drawing in graphite, watercolour and pastel reconstruction of Dundrennan Abbey by Alan Sorrell (b1904 d.1974), signed and dated 1959. Commissioned by Ministry of Works.

Fergus, Lord of Galloway, founded Dundrennan Abbey in 1142, with the help of David I of Scotland. The white-robed Cistercian monks came from Rievaulx Abbey, North Yorkshire and worshipped here for 400 years.

After establishing Dundrennan, monks went forth to found two more Cistercian abbeys in Galloway – Glenluce Abbey, around 1190, and Sweetheart Abbey, in 1273.

We know very little about the Dundrennan monks. The names of abbots and other officials are known from grave-markers, charters and other legal documents. A hint of the abbey’s economy comes from papers dealing with the wool trade.

Dundrennan’s ruins have a peaceful beauty. Its church and cloister lie in secluded woods below the little village. Together they hold some of the best early Gothic architecture in Scotland.

The church is the most impressive to survive from the 13 Cistercian monasteries set up in Scotland. It is laid out on the usual Cistercian cross plan, but has an unusual three-storey design graced by blind and open arcades. (The order’s legendary austerity was waning when the transepts were built in the later 1100s.) This complements the presbytery’s simple details – notably the ‘bundled-shaft’ piers with their plain, bell-shaped caps.

The cloister, although much ruined, is still largely traceable on the ground. The chapter house in the east range dates from the early 1200s and must have been very beautiful, judging by what remains.

The abbey’s most famous visitor was Mary Queen of Scots.

She was welcomed at the gates on 15 May 1568, following her escape from Lochleven Castle and her defeat at Langside. Mary was making for England and the relative safety – or so she thought – of her cousin, Elizabeth I. She never returned to her native land after setting sail for the Cumberland coast.

The fairy foxglove grows on the abbey walls. This rare, small, pink flowered plant is an Alpine from southern Europe. It’s said that the plant is found only where the feet of Roman soldiers once trod.

Find out more about Dundrennan Abbey