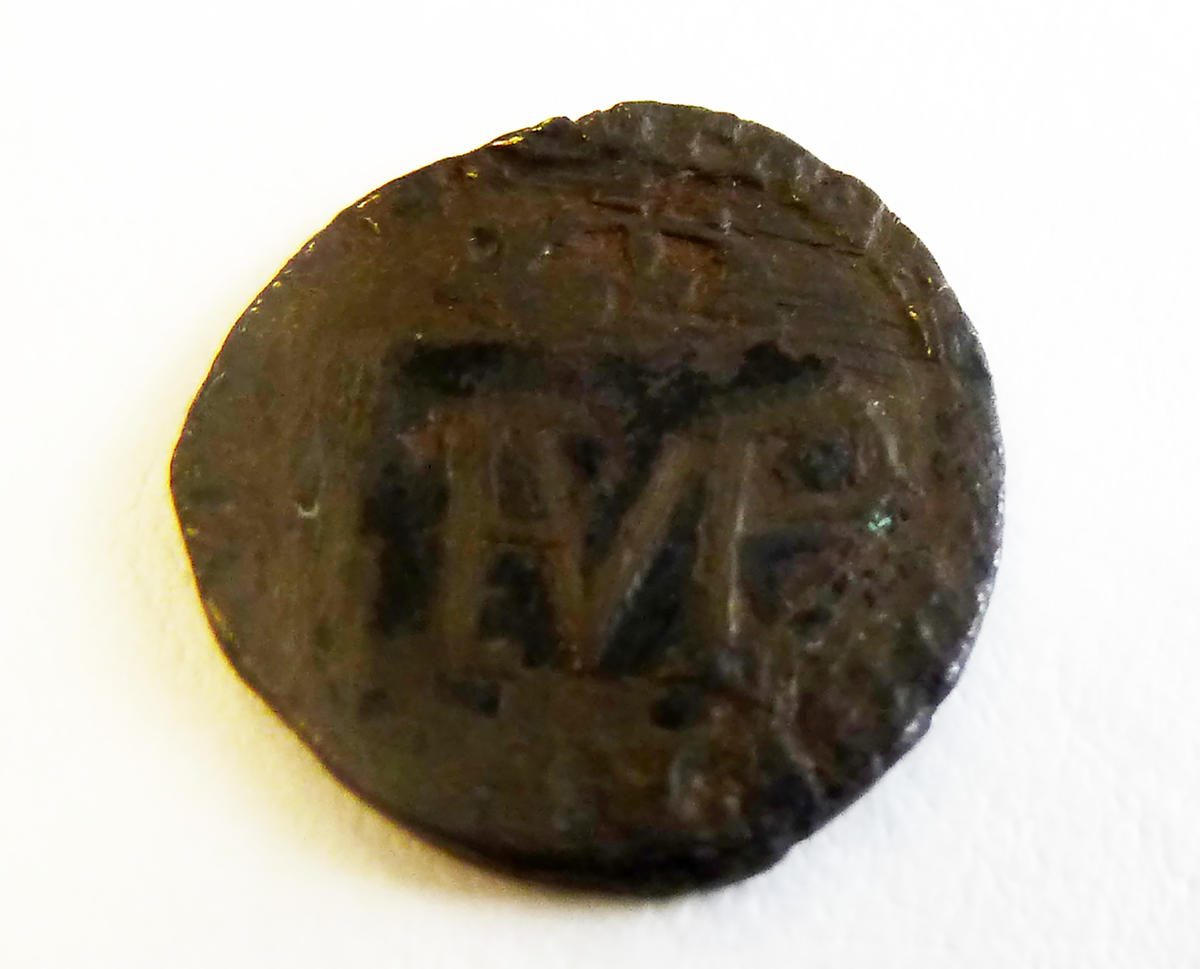 Also known as a hardhead, this coin was worth one and a half pence Scots. Mary's coinage is divisible into five phases, reflecting her early life, two marriages and two widowhoods.

This billon coin was found at Stirling Castle and offers an example of the second period coinage, 1558-60, during Mary's marriage to Francis, the French dauphin. The obverse design of this coin features a crowned FM monogram for Francis and Mary, each side flanked by a dolphin. The dolphin was the heraldic emblem of the dauphin of France, Francis. A crowned lion rampant is at design on the reverse.

The Latin inscription reads 'FRA ET MA D G R R SCOT D D VIEN' on the obverse. This translates as: Francis and Mary King and Queen of Scots and Dauphin and Dauphine of Vien. The reverse legend quotes ' VICIT VERITAS', which means 'truth conquers', followed by the date.

During Mary's reign numerous issues appeared in gold, silver and base metal, many of them comprising denominations never previously struck.

Stirling Castle has been likened to ‘a huge brooch clasping Highlands and Lowlands together’.

From high on a volcanic outcrop, the castle guarded the lowest crossing point of the River Forth for centuries. Today it remains a great symbol of Scottish independence and national pride.

Stirling Castle was first mentioned around 1110, and many royal dramas unfolded here. Until the Union of the Crowns in 1603, almost every Scottish monarch had either lived in the castle, or been crowned or died here.

A vast amount of historical and archaeological research was undertaken as part of the Stirling Castle Project. Find more detailed information on our dedicated Stirling Castle website. Or view our research as it was published originally on the SPARC website.

Stirling Castle is a complex monument of diverse buildings and spaces added over the centuries.

The three main enclosures within the castle are the:

At the castle’s heart is the Inner Close, a square formed of the principal buildings for royal occupation.

These buildings are the:

Around the Outer Close are the Great Kitchens (early 1500s) and later army buildings.

The Nether Bailey, at the lowest part of the castle rock, houses powder magazines from the 1800s.

Guarding the main entrance from the town are the:

An icon of independence

Throughout the Wars of Independence with England (1296–1356), Stirling was hotly fought over and changed hands frequently.

Bloody battles waged nearby include:

Robert the Bruce had the castle’s defences destroyed to prevent it falling into enemy hands again. It was not substantially rebuilt until 1336, when the English recaptured it. The castle finally fell back into Scottish hands in 1342.

Stirling was the preferred residence of most of Scotland’s later medieval monarchs, and most added something to its impressive architecture.

Scotland embraced the classical ideas coming from Renaissance Europe during the reign of James IV (1488–1513). He spent much time and money making the castle fit for a European monarch – partly to impress his queen, Margaret Tudor, daughter of Henry VII of England.

James V continued this legacy, as he was just as keen to impress his second French bride, Queen Mary of Guise. Their daughter, Mary Queen of Scots, lived in the Royal Palace as a child and was crowned here in 1543.

Later, in 1566, Mary’s own son, the future James VI, was baptised here. The fireworks display that ended the celebrations was the first recorded use of fireworks in Scotland.

In turn, James VI had the Chapel Royal built in haste for the baptism in 1594 of his first son, Prince Henry. A three-day celebration followed, but Henry died before inheriting the crown.

Find out more about Stirling Castle