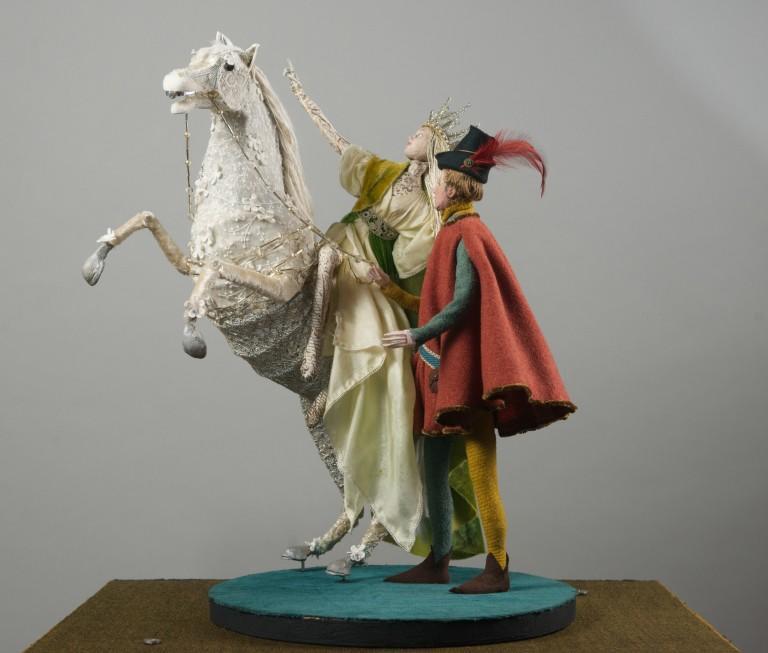 A costume figure scene from Sir Walter Scott's ballad of 'Thomas the Rhymer'.

This scene shows Thomas the Rhymer meeting with the fairy Queen of Elfland. During this encounter the queen takes Thomas as her prisoner for seven years. When he returns to the mortal world, Thomas has the power of prophecy.

Thomas the Rhymer features heavily in Scottish folklore. Many places in the Scottish Borders are associated with his name. Sir Walter Scott’s estate at Abbotsford, for example, includes a site called Rhymer's Glen. This is where he believed the meeting between Thomas and the queen occurred.

Part of a series of costume figures created by local artist Anne Carrick to celebrate the 200th anniversary of Sir Walter Scott's birth in 1971. They depict scenes from Scott's 'Minstrelsy of the Scottish Border', first published in 1802. The Minstrelsy is a collection of historical and romantic ballads that tell the stories of Border heroes and fairy tales. The figures are on display at Smailholm Tower in the Scottish Borders.

This scene shaws Thomas the Rhymer trystin wi the fairy Queen o Elflaun. Durin this tryst the queen taks Thomas as her prisoner fur seiven year. Whan he returns tae the mortal warld, Thomas has the pooer o prophecy and can spae.

Thomas the Rhymer is gey kenspeckle chairacter in Scots fowklore. Monie places in the Scottish Borders are associatit wi his name. Sir Walter Scott’s estate at Abbotsford, fur exemple, includes a site cried Rhymer's Glen. This is whaur he jaloused that the tryst atween Thomas and the queen taen place.