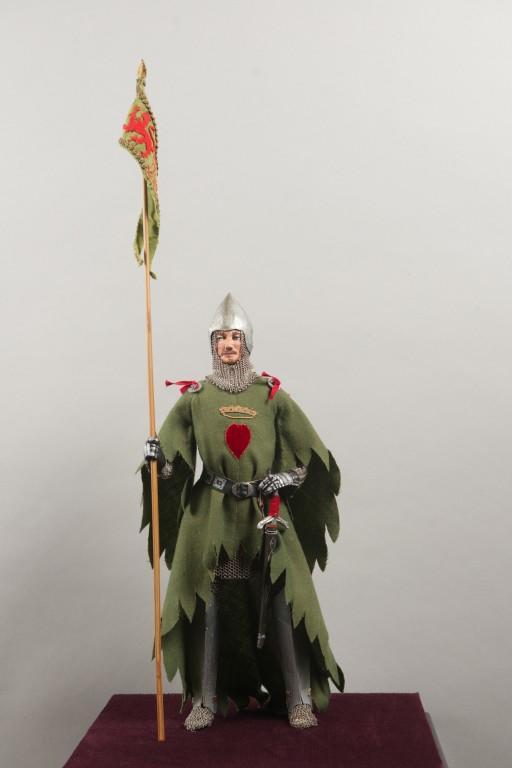 Costumed figure - The Douglas from The Battle of Otterbourne

Costumed figure - The Douglas from The Battle of Otterbourne

A costume figure of James, the second Earl of Douglas, from the ballad 'The Battle of Otterbourne'.

He wears a red heart on his chest, the symbol of the Douglas clan. In 1388 James led his men across the Scottish-English border into Northumberland. Their aim was to raid and burn whatever they encountered. Henry Percy, 1st Earl of Northumberland, meets James to try and stop the Scots before they do any more damage. This leads to the Battle of Otterbourne, where James dies, and Henry is captured by the Scots.

Part of a series of costume figures created by local artist Anne Carrick to celebrate the 200th anniversary of Sir Walter Scott's birth in 1971. They depict scenes from Scott's 'Minstrelsy of the Scottish Border', first published in 1802. The Minstrelsy is a collection of historical and romantic ballads that tell the stories of Border heroes and fairy tales. The figures are on display at Smailholm Tower in the Scottish Borders.

He wears a reid hert on his chest, the symbol o the Douglas clan. In 1388 James led his men across the Scottish-English border intae Northumberland. Their ettle wis tae reive and burn whitivver they cam across. Henry Percy, 1st Earl o Northumberland, trysts wi James fur tae ettle at stappin the Scots afore they cause onie mair skaith. This leads tae the Battle o Otterburn, whaur James dees, and Henry is captured by the Scots.