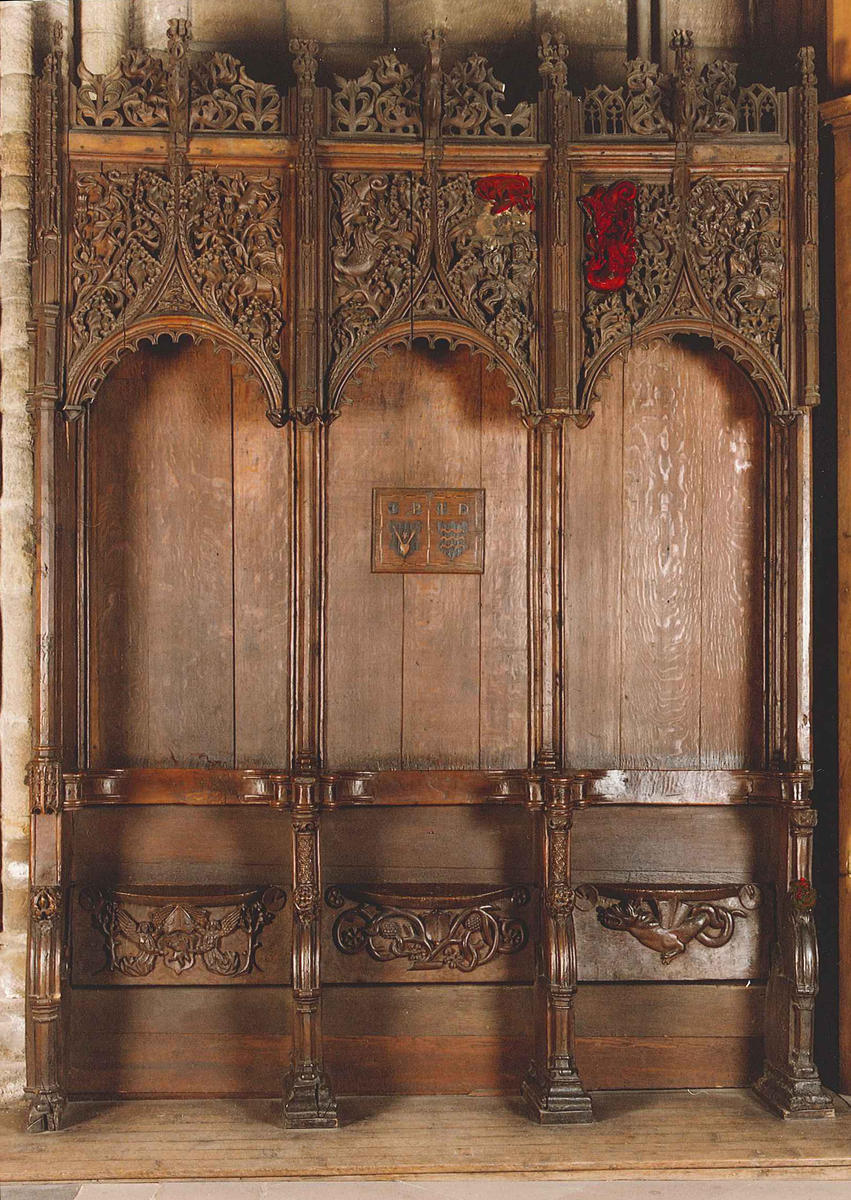 This ornate bishop’s stall from the choir at Dunblane Cathedral bears the arms of Bishop James Chisholm (1487–1526). In Scotland, 15th-century stalls of this kind are very rare, as many were removed during the Protestant Reformation.

Floral and fruit motifs are carved on this example, which also has Gothic-style canopies. Some wooden figures have been removed from the stall. But it still has three finely carved ‘misericord’ seats. When tipped up, such seats reveal a small structure that offers support to a person standing or kneeling in prayer. One of the seats has a carving of a bishop’s mitre.

Dunblane Cathedral is a fascinating building that stands on a site that has been sacred for well over 1,000 years. Its beautiful Gothic exterior, conserved by a 19th-century restoration, hides a past of neglect and renewal.

The distinctive red sandstone tower sits at a strange angle to the later church, which was laid out in one go and survives mainly because it went on to serve as a parish church. The chancel was used for worship up until 1886, when it was deemed too small.

The ruined nave was restored to the designs of Robert Rowand Anderson from 1889, with the weathered medieval stonework retained.

Today, the church is an active place of worship. Inside are Pictish carved stones, rare 15th-century choir stalls and handsome 19th-century church furnishings.

Two cross-slabs from the 7th or 8th century found on the site suggest an early Christian presence. There has probably been a religious centre here since at least the 9th century.

The name Dunblane (meadow of Blane) perhaps comes from the site’s use by monks from St Blane’s. They may have fled the Isle of Bute with their saint’s relics to escape Viking raids.

The first mention of a bishop at Dunblane was in 1155, following the return of the bishopric and the building of the first cathedral. It still stood unroofed in 1237, when Bishop Clement secured papal approval to replace it with a grand new cathedral.

The cathedral was staffed by secular canons, or priests. They performed their daily services in the choir, separated from the nave by a screen across the broad arch – slots above the arch show the screen’s likely position. A great rood – or cross – once stood in the rood loft above the screen, and the choir stalls backed onto the screen.

Following the Protestant Reformation of 1560:

Architect James Gillespie Graham restored the chancel in 1816. By 1886, its capacity had been deemed insufficient, and the nave was restored under Robert Rowand Anderson’s direction. The elaborate pews and choir stalls were added between 1912 and 1914.

A recent addition to the church is a memorial to the victims of the 1996 Dunblane massacre, located in the south aisle.

Find out more about Dunblane Cathedral