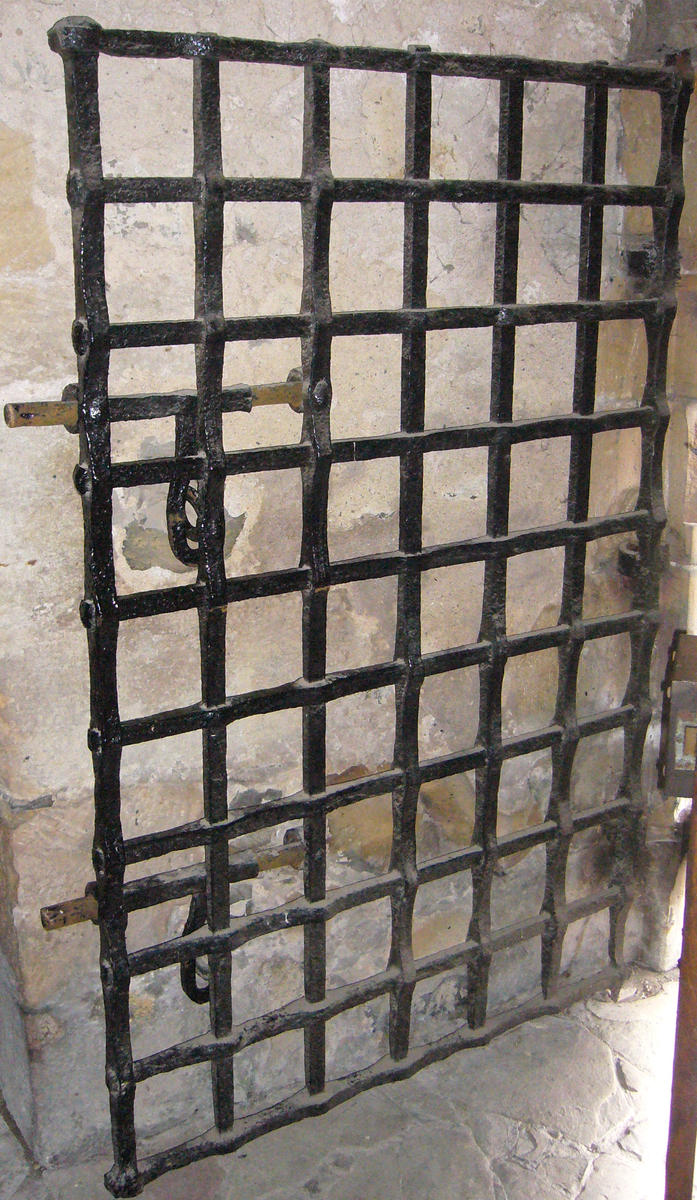 Yetts are iron gates that were often found behind the main door of a castle or townhouse. They were used for security and would have helped protect against intruders and thieves. The interlaced design of the bars meant that it was not possible to remove any one bar individually. They opened in the same way as a normal door or gate, with hinges on one side and usually a bolt on the other.

Elcho Castle was built in the 16th century for Sir John Wemyss. Documents from 1570 show that Sir John owed the late Thomas Bryson (or Boynting) £7 for ironwork, presumable for the castle’s yett and window grilles.

Elcho Castle is one of Scotland’s best-preserved 16th-century tower houses. A member of the family of Wemyss of that Ilk built the residence around the time of the Protestant Reformation in 1560.

The family could trace their lineage back to the 12th century. A descendant of the builder of Elcho was created Lord Wemyss of Elcho in 1628 and Earl of Wemyss in 1633.

Little history is attached to Elcho. It simply served as a fine house in the country for the laird and his lady, their family and servants, who lived mainly at their chief seat, Wemyss Castle, in Fife.

By the mid-1700s, Elcho was no longer used at all as a noble residence. Repairs carried out by the 8th Earl around 1830 protected Elcho’s future, and in 1929 the 11th Earl entrusted it into state care.

Wemyss of that Ilk

The family of Wemyss of that Ilk (‘of that Place’) took their surname from the barony of Wemyss, on the Fife coast, which has many caves. The name Wemyss derives from ‘weem’ (uamh in Gaelic) meaning ‘cave’.

The first reliable record of the lands of Elcho dates from 1429, when Sir David Wemyss of that Ilk and Hugh Fraser of Lovat agreed a compact at ‘Elthok’.

There is also a reference to ‘Elchoch’ in Blind Harry’s poem The Wallace, which describes the life of William Wallace. But this wasn’t written until the 1480s and isn’t a reliable source.

All this time, the adjoining lands of Wester Elcho contained Elcho Priory, a convent of Cistercian nuns, founded in the early 1200s. By 1550, the prioress and eight nuns were in financial difficulties. Sir John helped them out and was appointed heritable bailie in return.

Various parcels of priory land were leased to Sir John over the following years. By the Reformation in 1560, he held almost all the lands of Elcho Priory. The present Elcho Castle was begun around this time – a statement that the family was firmly established in the lands of both Easter and Wester Elcho.

Elcho Castle illustrates a transition in Scottish building styles, from castle to mansion. It combines an imposing exterior with an interior that gave its noble occupants and their guests considerable comfort and privacy.

The castle has changed little since it was built, apart from a new roof and new window glazing added in the 1830s. The large tower house has smaller towers projecting from it – some round and others square.

To the south of the castle was a courtyard enclosed by an outer wall. Gardens and grounds surrounded the complex.

The castle is no longer inhabited by humans, but remains home to many living creatures.

Living in and around the castle are:

Find out more about Elcho Castle