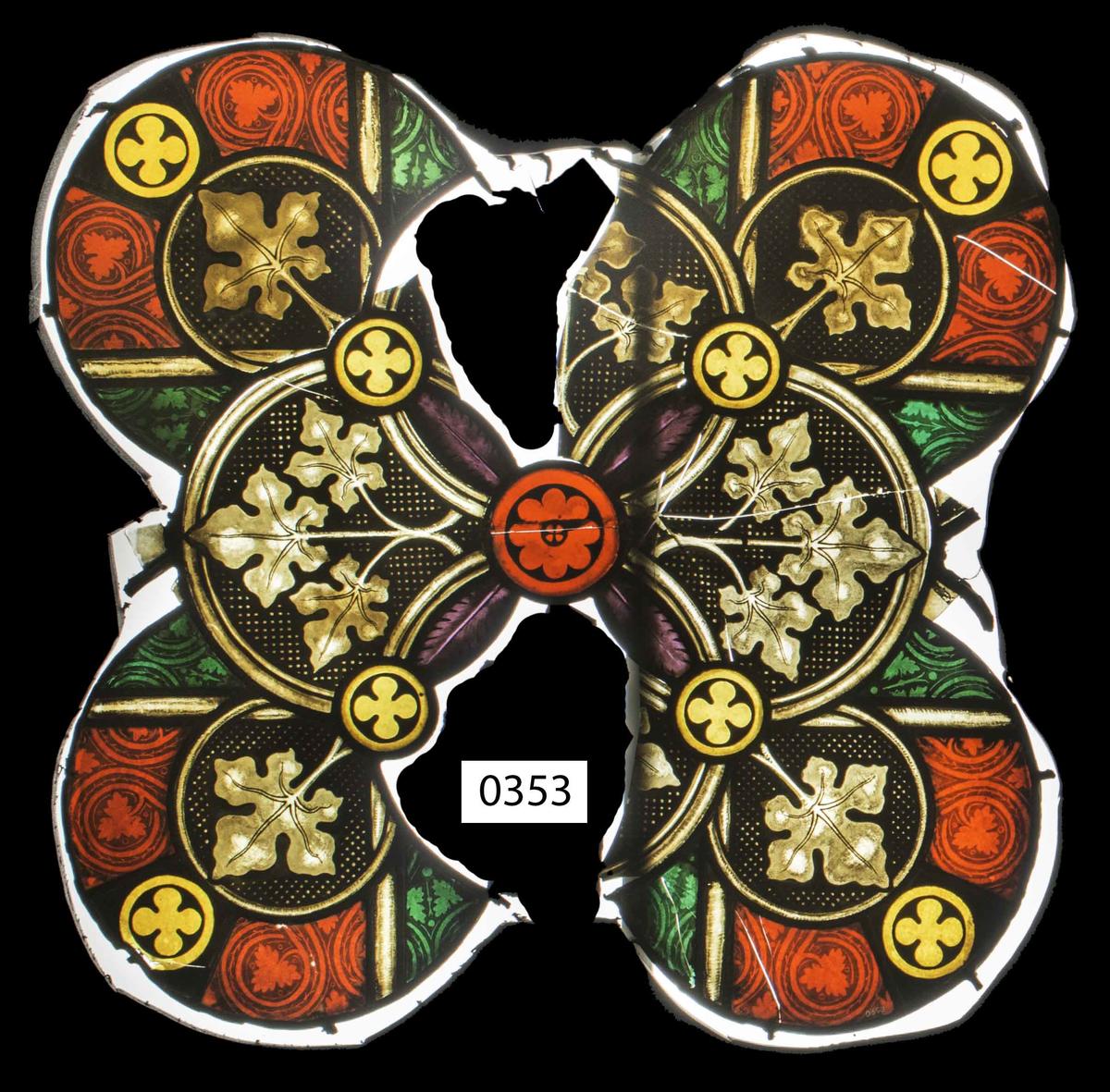 Quarterfoil window panel with foliage design. From a series of windows made for Glasgow Cathedral by the Royal Bavarian Stained Glass Works, Munich, in the 1860s. The Munich glass was removed in mid-20th century. Over 2000 fragments are now preserved in the cathedral’s upper gallery.

Glasgow Cathedral stands near the heart of Scotland’s largest city. It’s the only medieval cathedral on the Scottish mainland to have survived the Protestant Reformation of 1560 virtually intact.

Around it there used to be a chanonry – a precinct where the bishops (and, later, archbishops) and clergy lived. A thriving burgh sprang up to its south and west under the bishops’ patronage. Since then, the burgh has grown into the great metropolis we know today.

This inspiring edifice dates mostly from the 1200s. It was dedicated to St Kentigern, also known as St Mungo.

Kentigern is believed to have been the first bishop of the area that is modern Strathclyde. His influence spread widely, and it was later claimed he led a diocese stretching from Loch Lomond to Cumbria.

It’s thought that Kentigern was buried on the cathedral site around 612.

Glasgow Cathedral is one of the finest buildings of the 1200s to survive in mainland Scotland. Parts of it are older still.

Building fabric from Bishop Jocelin’s time (1174–99) is still standing. He is recorded as ‘gloriously enlarging’ his cathedral in 1181. Fragments from the previous cathedral have also been found.

When a fire halted Jocelin’s work, it fell to his successors – notably Bishop William de Bondington (1233–58) – to finish the cathedral.

The end result was a Gothic creation consisting of:

The intention was to house a shrine to St Kentigern at the main level, behind the high altar, to complement the saint’s tomb in the crypt beneath.

The Reformation removed the need for bishops answerable to the Pope. Until their final abolition in 1689, bishops continued in the church in Scotland, but their role was greatly reduced.

Glasgow Cathedral was ‘cleansed’ of its Catholic trappings and put to use as a parish kirk – in fact, three parish kirks. The choir housed the Inner High Kirk; the west end of the nave, the Outer High Kirk; and the crypt, the Barony Kirk.

But a growing appreciation of the qualities of medieval architecture led to another change. By 1835, both the Outer High Kirk and the Barony Kirk had left the premises. This left the great medieval cathedral to return to something approaching its former glory.

In 1836, the cathedral became state State property. By 1857, the entire building was looked after by the State. A campaign of restoration began and continues to this day.

Find out more about Glasgow Cathedral