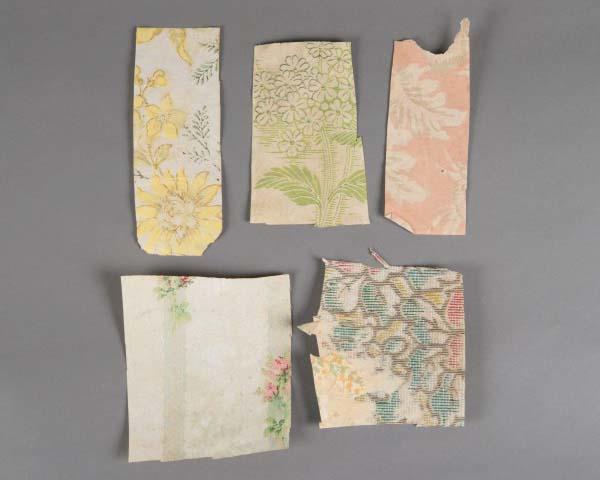 Sunnybrae Cottage was built in the 1700s and lived in until 1986. It has been altered over the years and is a valuable example of how people in rural Perthshire lived through the centuries. Known as a ‘byre house’, in the 18th and 19th centuries the family would have shared the house with their cattle.

These six wallpaper samples were found in Sunnybrae Cottage. In Britain wallpaper was first used in the 16th century. In its early days it was a luxury used to decorate the insides of cupboards or small rooms. By 1900 wallpaper was being mass produced which made it more affordable. It was found throughout both rich and poor households. It is most likely this wallpaper is from around 1950 – 1980.

Sunnybrae Cottage was probably built in the 1700s as a fairly typical byre house. The family would have occupied the west end, the cattle the east.

Its walls were probably made of turf, with the weight of the roof supported on pairs of curved timbers called Celtic cuppils, or crucks. This structure, including the thatch roof, is a remarkable survival today.

The original house probably had no proper windows or chimney. The fire would have been in the middle of the house and smoke simply filtered out through the thatched roof.

As time went on, the turf walls were replaced by stone and windows were installed, but the timber crucks remained. By the 1800s the thatch roof was covered over with sheets of corrugated iron. There were other improvements, including:

In the 1900s the cottage was modernised. A lean-to extension at the back was built to house a bathroom and scullery. Local builder Robert Gow of Blair Atholl was paid £280 for the work.

The old timber lined walls were covered over with plasterboard and woodchip wallpaper. In 1980 a new gas fire was fitted.

Until 1945, Sunnybrae formed part of a larger estate and was rented out to various families. A farmer and distiller named Alexander Scott was the tenant in 1841. He lived here with his wife and two children and four others who seem not to have been close family – it must have been quite crowded.

In 1896 the tenant was Donald Cameron, a retired gardener. His wife Ann and daughter Annie spoke both Gaelic and English, a reminder that Gaelic was commonly spoken here.

A woman named Jean MacDonald bought Sunnybrae in 1945 and became its first owner-occupier. She lived here till 1986, running a bed and breakfast in the cottage.

A local tradition holds that Sunnybrae was the site of a murder in the 1700s. Stewart of Bonskeid and his brother-in-law Stewart of Shierglass were drinking in an illicit alcohol store in the house, when a brawl broke out and Bonskeid was stabbed in the chest.

This event has been recorded as happening at the west end of Pitlochry, but its connection to Sunnybrae Cottage has not been verified.

Find out more about Sunnybrae Cottage