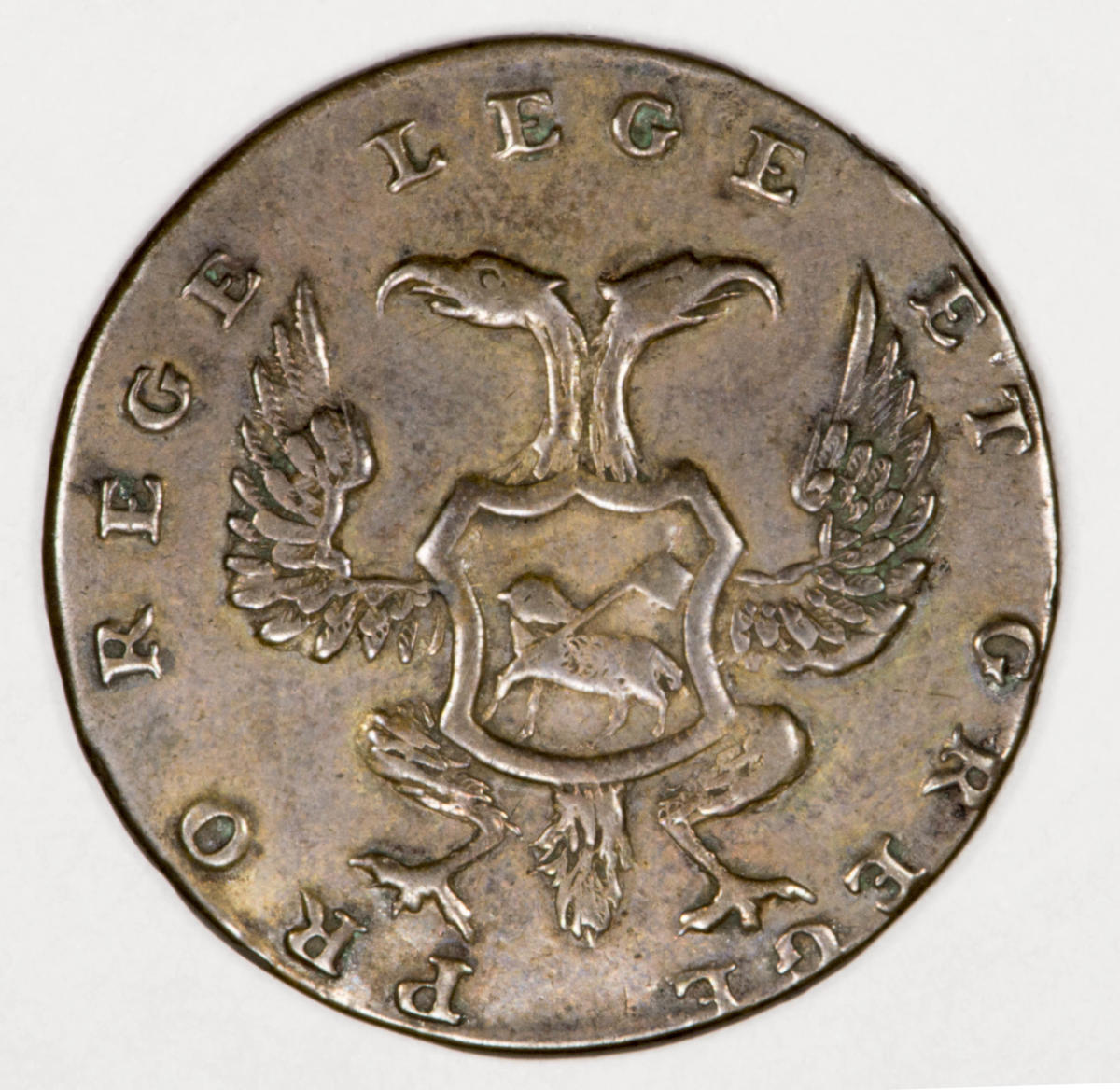 Copper halfpenny trade token of Patrick Maxwell, Perth, 1797. The obverse depicts a hank of yarn above a package of dressed flax. The inscription reads 'PERTH HALFPENNY 1797'.

The reverse shows the Coat of Arms of the City of Perth, consisting of a double-headed eagle with shield, displaying lamb holding a saltire flag. The inscription reads 'PRO REGE LEGE ET GREGE'. An inscription around the outer edge of the token reads 'PAYABLE AT THE HOUSE OF PAT. K MAXWELL X X '.

Patrick Maxwell was a grocer and spirit dealer on the High Street in Perth, the firm later becoming Maxwell & Son. The hank of yarn and bale of flax refers to the linen trade in the town which was its main industry at the time of the token’s issue.

This token was found at Huntingtower Castle, near Perth, which was built in the 15th century as the residence of the Ruthven family. By the late eighteenth century the castle was abandoned. Between 1805 and 1815 James Buchan used it as accommodation for workers at a cloth-printing factory.

Huntingtower Castle has hosted some notable visitors, and been party to some dramatic events. Most famously, Mary Queen of Scots stayed here in 1565, while on honeymoon with Lord Darnley.

A lordly residence for 300 years – from the 1400s to the 1700s – the castle is linked to both the Ruthvens (later earls of Gowrie) and the Murrays (earls of Tullibardine and later dukes of Atholl). Before 1600, Huntingtower was known as the Place of Ruthven.

In a famous episode known as the ‘Ruthven Raid’, the 1st Earl of Gowrie held James VI, Mary’s son, here against his will in 1582. An equally bizarre event called the ‘Gowrie Conspiracy’ led to the downfall of the 3rd Earl of Gowrie in 1600. The Ruthvens were disinherited and their forfeited castle was renamed Huntingtower.

Huntingtower today looks like a single building, but the Place of Ruthven had consisted of two fine tower houses standing about 3m apart. A frontage facing the gardens to the south may have always linked the pair.

How and why this highly unusual layout came about isn’t known. Other buildings, including a great hall, stood beside the tower houses around a courtyard. All lay inside a stone defensive wall.

The Murrays altered the medieval castle in the later 1600s, to try to make it look more like a regular country mansion.

Huntingtower still has medieval treasures including:

Rise and fall of the Ruthvens

The Ruthvens settled in Perthshire in the late 1100s, but the oldest part of the present castle dates only from the 1400s. Exactly where the family lived for the 250 years in between times is a mystery.

In 1480, the two sons of William, 1st Lord Ruthven, were each granted letters of legitimation. This may explain the building of two tower houses so close together – one for each son.

In 1581, James VI made the 4th Lord Ruthven the Earl of Gowrie. The following year, the Place of Ruthven was the setting for a celebrated coup, the Ruthven Raid, during which the 1st Earl held the young king against his will for 10 months.

The king forgave his earl, but after the Gowrie Conspiracy of 1600 – in which James alleged that the 3rd Earl had tried to have him assassinated – the king had the earl executed and his family forfeited their estates.

The Place of Ruthven was given to the Murrays of Tullibardine and renamed Huntingtower.

Huntingtower is home to a large colony of pipistrelle bats.

Find out more about Huntingtower Castle