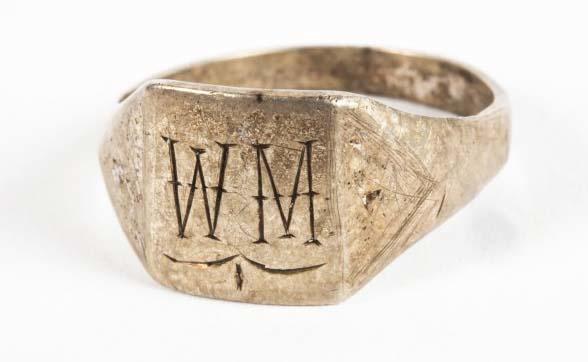 This 19th century signet ring is stamped “STIRLING SILVER” on the inside and was probably worn by a man. However, the ring has no hallmark which is unusual, and would have been illegal at the time. It is suspected that the ring is a fake, imitation alloy.

Signet rings were common in the medieval period. They were worn by upper class people like nobles and royals. These rings had special crests or coats of arms on them. These acted like signatures and would be used to stamp wax seals. In the 19th century, signet rings were very stylish and worn by all social classes for fashion, rather than for use as a wax seal.

The use of metal alloy, which is cheaper than a precious metal like silver, suggests the ring was made to look pricey but was actually cheap. This meant people with less money could keep up with the trends of the time.