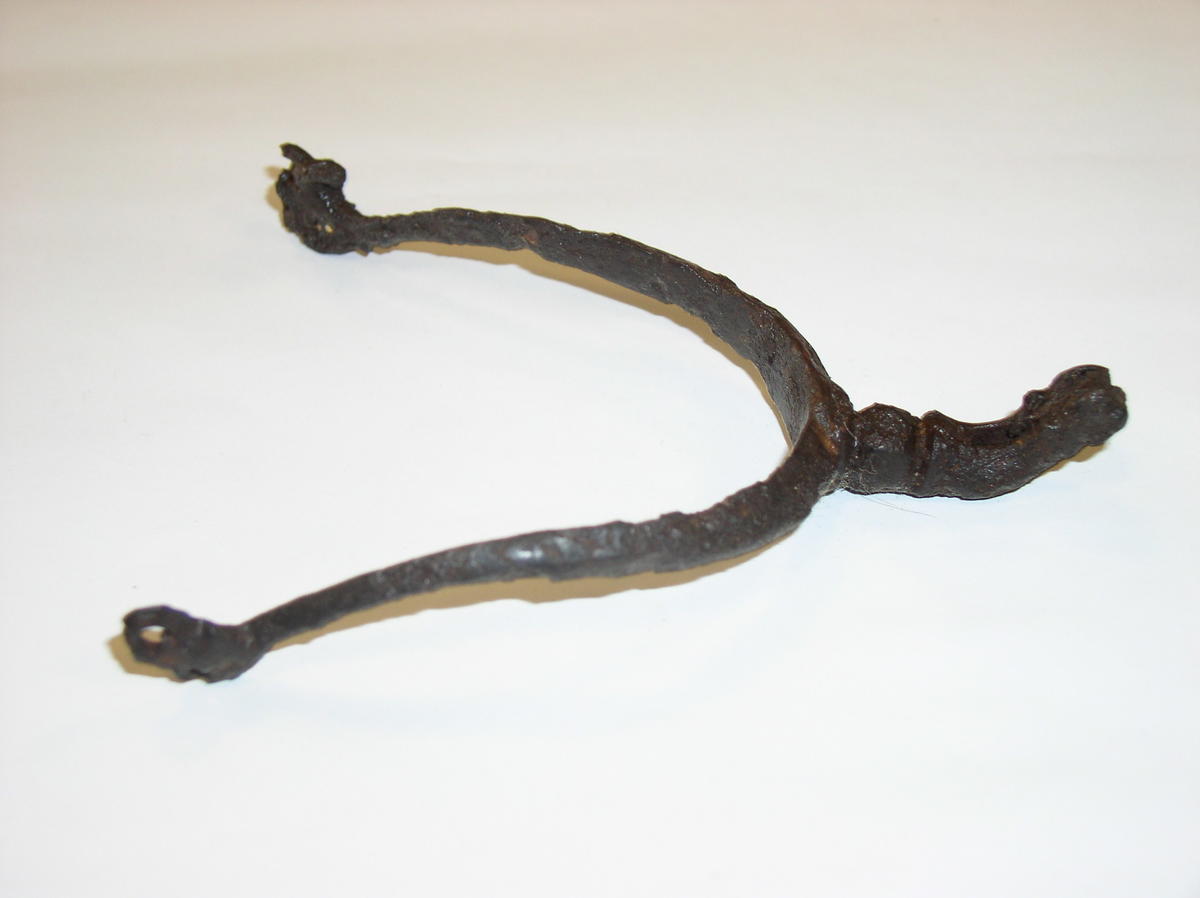 Found at Kildrummy Castle, Aberdeenshire. Worn on boots in the early 1500s, it would have once had a spiked disc or rowel used for disciplining a horse. By the 1500s spurs were also used as decorated fashion accessories.

Even as a ruin, Kildrummy’s great size and strength are easy to appreciate. Though north-east Scotland has many fine strongholds, Kildrummy is known as ‘the noblest of northern castles’. In its medieval heyday, the huge castle dominated Strathdon as seat of the mighty earls of Mar.

Built in the mid-1200s, Kildrummy was seldom far from the political spotlight. As Scottish kings battled to overcome rebellion in Moray, the castle guarded the point where main routes from the south met before entering Moray and Buchan.

Edward I of England – ‘Hammer of the Scots’ – visited Kildrummy twice during the Wars of Independence.

In 1435, James I annexed the earldom of Mar and took ownership of Kildrummy. This is often used as an example of his policy of reducing the power of his nobles. But James was heavily in debt and would also have benefited from the earldom’s sizeable revenues.

James IV granted the castle to Alexander Elphinstone in 1510. In return, Elphinstone had to provide “a hundred mounted men with lances for service in the King’s wars and military operations against his enemies, if any such should arise”. Elphinstone was among those killed alongside the king at the Battle of Flodden in 1513.

Kildrummy belongs to the great age of castle-building in the 1200s.

The once mighty Snow Tower, the earl’s residence, collapsed in 1805. But the Warden’s Tower and two other lesser towers still stand. So does the gable of the castle chapel, a handsome building with three tall elegant windows that let light shine on the high altar.

Edward I visited Kildrummy in 1296 and again in 1303, this time with Master James of St George, builder of Harlech, his great castle in north Wales.

The ground plan of Kildrummy’s twin-towered gatehouse is very similar to Harlech. So it’s likely that this gatehouse was added on Edward’s orders.

The Erskine earls of Mar finally won control of Kildrummy in 1626. They remained loyal to the Catholic King James VII and II following his exile in 1688, and became well-known Jacobites.

In 1715, John Erskine returned to Kildrummy to begin a rising in support of James VII’s son, Prince James Francis Edward Stuart, ‘the Old Pretender’. When that rising failed, the earl went into exile, and Kildrummy’s days as a noble residence came to an end.

Find out more about Kildrummy Castle