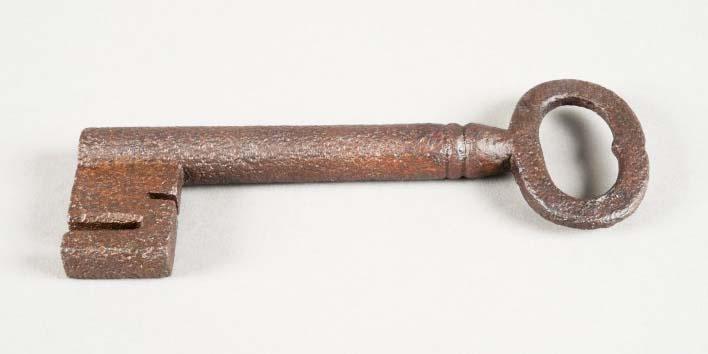 This iron key was found outside Claypotts Castle. It is what archaeologists call a ‘stray find’, meaning that it was found by chance. This can happen when objects buried in the ground are disturbed by things such as construction works, farm ploughing, and animal activity.

Claypotts Castle was built by John Strachan of Claypotts during James VI’s reign – the dates 1569 and 1588 are carved on the castle’s distinctive crow-stepped gables.

Before the Protestant Reformation of 1560, the Strachans worked the lands of Claypotts as tenants of Lindores Abbey. The demise of the Catholic church gave John Strachan and his wife a higher status, which they marked by taking over Claypotts and building a castle there for themselves and their seven children.

The Strachans moved out soon after John’s death in 1593. Local laird William Graham of Ballunie bought the estate, which was later sold by his son David to ‘Bonnie Dundee’ – William Graham of Claverhouse, ancestor of the famous Jacobite leader, John Graham, Viscount Dundee.

Graham never slept a night at Claypotts, however – his seat was at Dudhope Castle in Dundee. Claypotts was left to be inhabited by farmworkers.

Claypotts was built at a time when a castle’s defensive needs were giving way to considerations of aesthetics and comfort. The 12 gun holes around the ground floor are more security measure than threat – the equivalent of today’s security lights.

Its plan is shaped like a Z, with two circular towers at diagonal corners of a rectangular central block. Z-plan castles like this were popular in the late 1500s in Scotland. The plan allowed the central block to be used for the hall on the first floor, and possibly a long gallery on the top floor. The two flanking towers allowed for a couple of staircases and lots of bed-chambers. Usually one tower was used for the laird’s family, and the other for guests.

Compared to most other castles of its type, Claypotts is tiny. But the Strachans clearly wanted to create a big impression. Whoever designed the house for them used a unique combination of round towers and corbelled turrets.

Originally the roofline would have been even more fancy: at some point a balcony and some dormer windows have been lost. Around the house there would have been gardens and probably a courtyard, so the whole complex would have appeared much grander.

The roof is particularly of note: much of the original late-medieval timber survives, and it’s designed in a strongly solid way across the tower’s compact but elaborate plan.

Find out more about Claypotts Castle