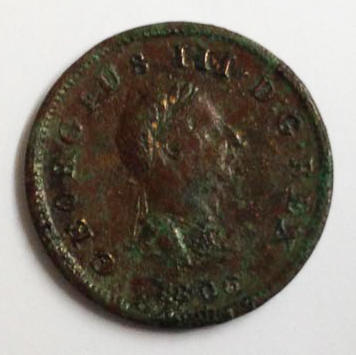 This copper coin offers an example of the so called Soho Mint coinage, issued by Matthew Boulton's mint in Birmingham.

The shortage of small change was giving the country big problems at the time. Allegedly by 1780, only 8% of copper coins in circulation were genuine regal coins. The Royal Mint contracted Matthew Boulton to produce copper coinage in 1797 and the minting of halfpennies was outsourced to Birmingham to combat counterfeiting. It is said the first halfpenny was produced during the reign of Edward I in the 1200's and was then abandoned in 1969 during the change to the decimal coinage