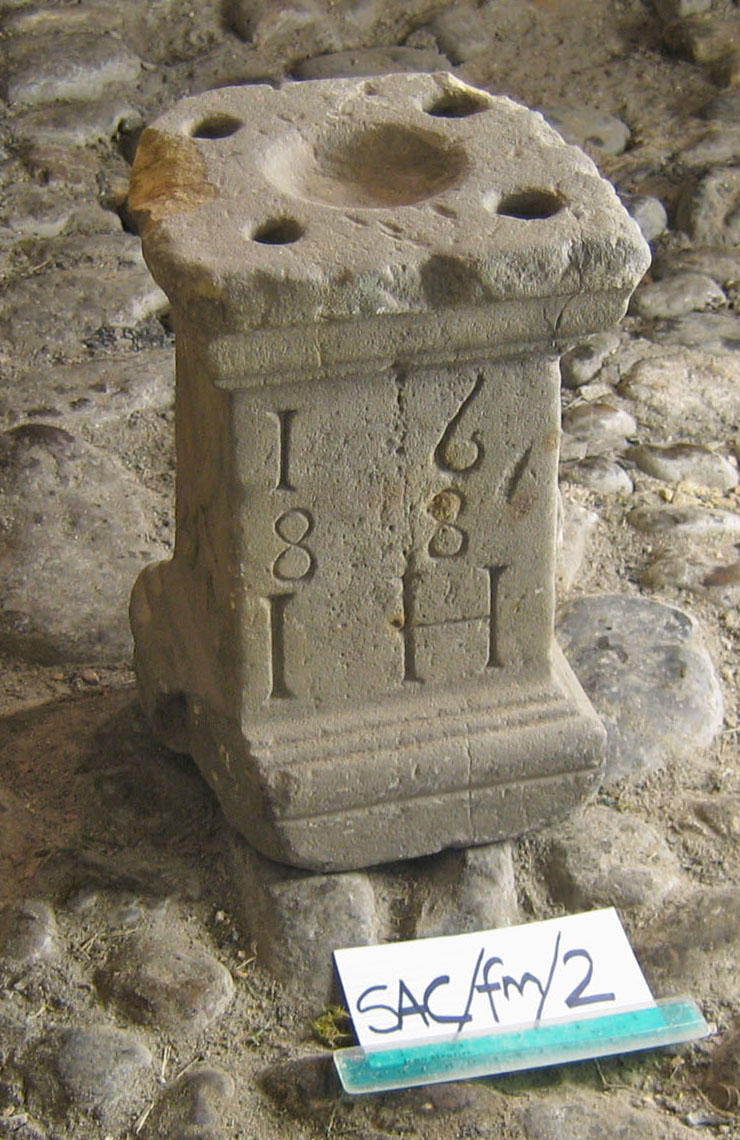 This small stone block was originally used as a candle holder. There is a hole in each corner for the candles, and a central dish where the wax would have collected.

The stone was later reused as a tomb marker. A pair of shears and flat iron were carved onto the sides, symbols of a tailor. The date of 1688 and initials IH have led to the stone bring identified as belonging to James Husband, a tailor based in St Andrews during the 17th century.

St Rule’s Church was likely built around 1130, as the first place of worship in Scotland for the newly arrived Augustinian canons. This Continental reformed order supplanted the existing clergy.

The 33m tall St Rule’s Tower may have been a beacon for pilgrims heading for the shrine of St Andrew.

The cathedral was begun in 1160–2 by Bishop Arnold. Work continued over the next 150 years, but was stalled by a storm in 1272, which blew down the west front, and by the first War of Independence against England.

When the cathedral was finally dedicated in 1318 – in the presence of Robert the Bruce, by then king – it was by far the largest church in Scotland. So it was fitting that St Rule’s became the headquarters of the Scottish Church.

The cathedral church is now ruined, but large areas survive.

Its superb remains include the:

The cloister retains its ruined chapter house and the restored stone-vaulted undercrofts that now house the cathedral museum. On display are fascinating artefacts from the early medieval era to post-Reformation times.

The Pends Gate (the main entrance into the cathedral precinct) and much of the precinct wall survive. Beyond the wall, on a ledge above the sea, are the foundations of the church of St Mary on the Rock (St Mary Kirkheugh). This was probably built to house the successors of the Culdee foundation, displaced from the cathedral site by the Augustinians.

The cathedral and the Protestant Reformation

In 1559, John Knox preached a fiery sermon in St Andrews parish church, and the cathedral was ‘cleansed’ as a result. In 1561, it was abandoned and replaced by the parish church as the chief place of worship. St Rule’s was then left to fall into ruins.