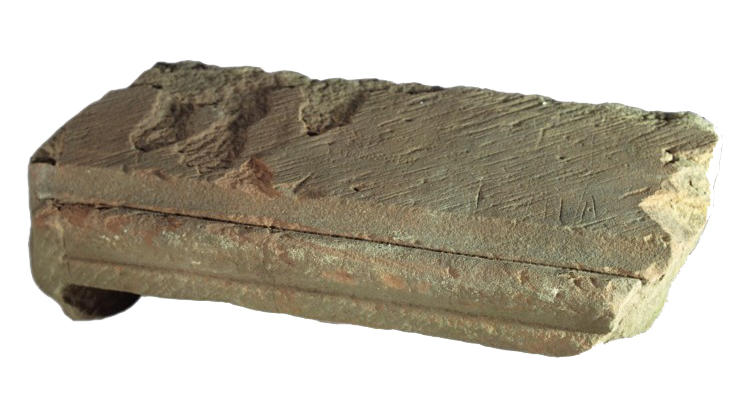 This stone probably formed part of a fireplace surround from Cadzow Castle, South Lanarkshire. It bears an inscription reading ‘LAT DEID SCHAV’, and the letters ‘V’ and ‘S’ intertwined to form a mongram. It is probably linked to the motto of the Fleming family, ‘LET THE DEIDS SCHAW’ (let the deeds show). Cadzow Castle was built around 1530 by Sir James Hamilton of Finnart and was abandoned after it was attacked and demolished in 1579.

Sir James Hamilton of Finnart may have built Cadzow Castle when he was made guardian of his younger, legitimate half-brother the 2nd Earl of Arran in 1529. The earl himself likely completed the work in 1542–54.

The Hamiltons were the Scottish royal dynasty that never was. One of the greatest noble houses in Scotland, the earls of Arran were just one step removed from the crown.

Their chief seat was at Hamilton Castle in the valley below Cadzow Castle, and it’s likely that Cadzow was a part of military activity in the area in the mid-1500s. A rare example of a ‘hidden’ castle, Cadzow was intended as a place of last resort.

The Hamiltons were key power figures in both the minority and personal reign of Mary Queen of Scots, though they were not always in royal favour. They were among those who rebelled against the queen following her marriage to Lord Darnley, causing Mary to seize nearby Hamilton and Craignethan castles in 1565.

Yet following Mary’s forced abdication in 1567, the Hamiltons formed the core of her support. Hamilton Castle changed hands in 1568, 1570 and, with the help of cannon from Edinburgh Castle, was finally demolished in 1579, along with Craignethan Castle. It’s likely Cadzow met a similar fate.

The Dukes of Hamilton probably worked to ‘romanticise’ the castle in the 1700s and 1800s. The walls on its north side were artificially raised, and clay was used to waterproof the structures.

Sir Walter Scott immortalised Cadzow in a poem. He was one of several authors who associated the castle with a heroic image of antiquity.

The castle stands within an extensive historic landscape. Close by are elements of a deer park, where the Cadzow oaks date back to the 1400s.

Find out more about Cadzow Castle