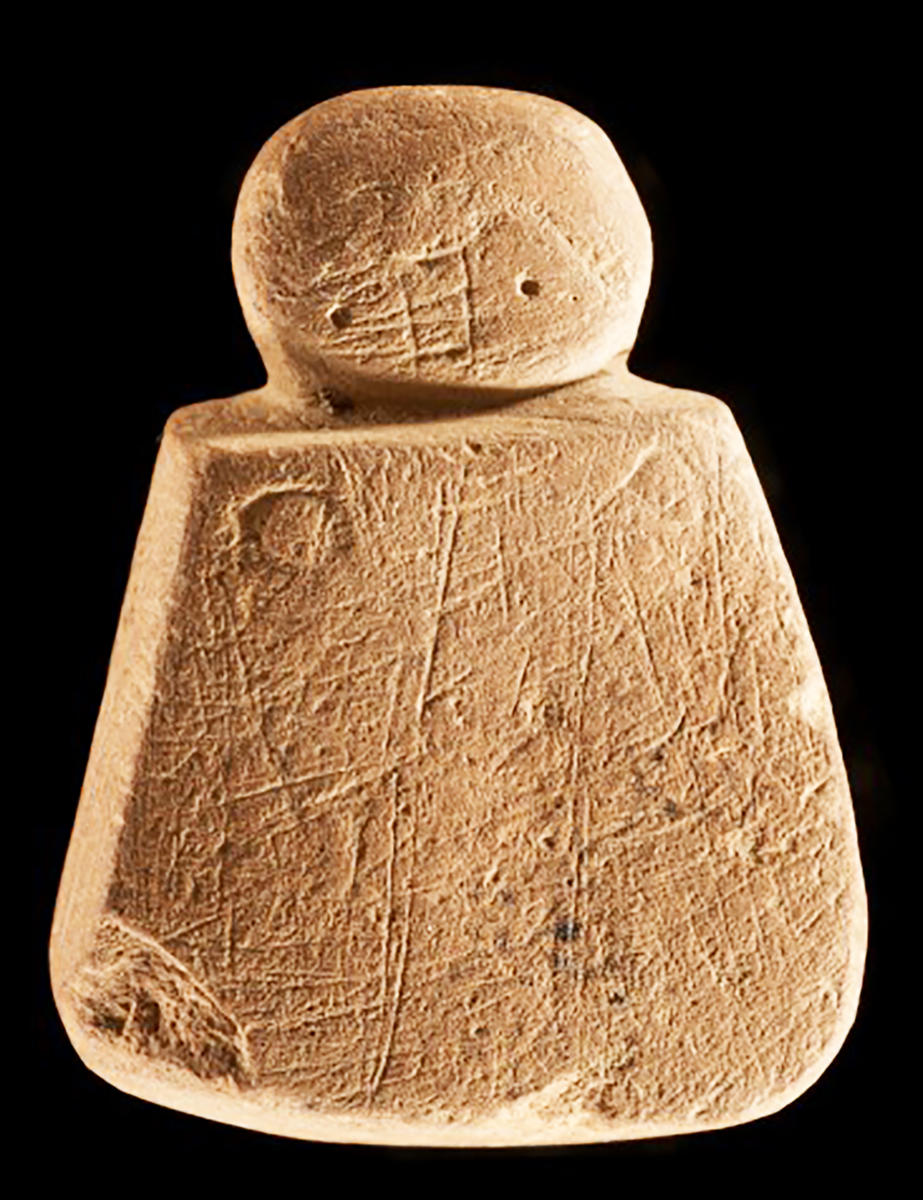 Known both as the ‘Orkney Venus’ and the ‘Westray Wifie’, this Neolithic figurine is just 4cm tall. Made of stone, its rounded head has two eyeholes, a brow line and markings to suggest a nose and mouth. The long, lozenge-shaped torso looks a little like the exaggerated form of a woman, with wide hips.

The figurine was found in 2009 during a Historic Scotland dig at Links of Noltland. It’s the earliest depiction of a human form found in Scotland – and the earliest portrayal of a face found in the United Kingdom. The figurine is on loan from the Crown and is currently on display at Westray Heritage Centre.

More than a dozen buildings at Links of Noltland date to the Neolithic period, when early farmers settled here. One of them – the Grobust building – suggests a settlement on this site to rival Skara Brae, the well-preserved Neolithic village on mainland Orkney.

Neolithic midden protected the buildings. The deep layers of waste have also revealed:

• valuable information about the environmental conditions of the time
• many objects such as pottery, stone and bone tools

One such find was the ‘Westray Wifie’ or ‘Orkney Venus’, the earliest artistic representation of the human form to be found in the UK.

It’s thought that the Neolithic buildings were deliberately abandoned, and the small stone figurine (thought to be of a woman) may have been a religious offering closing the site’s use.

The semi-subterranean, multi-cellular Grobust building is built into the sand dunes. Whale rib remains have been recovered from the floor levels and it’s likely that this was used as a roof rafter. The building was deliberately abandoned and infilled in Neolithic times.

Six other Neolithic buildings are clustered together as a group (Area 5) and linked by short passages and surrounded by a large enclosure wall.

All six buildings have:

‘Structure 9’ in this group is especially fascinating. Large numbers of cow skulls were deliberately placed, inverted, in the foundation of its walls.

Most of the buildings were reused during the Neolithic period. Interior walls were reconfigured into cruciform shape, forming boxbed-like recesses and compartments (again like Skara Brae and Ness of Brodgar, another Neolithic site on mainland Orkney).

The site is also home to at least 10 Bronze Age buildings – Orkney’s largest settlement of this era – which give an amazing insight into this early society.

The Bronze Age buildings are larger than the Neolithic ones and are formed in three main clusters.

Interiors feature orthostats (upright stones) and suggest tether posts for livestock, so animals may have sometimes come inside.

A graveyard close to one of the house complexes was found to contain a mix of cremations and burials of at least 50 people. Some of the burials were marked with coral.

Historic Scotland has initiated a programme of dune consolidation to protect buried archaeological remains not yet excavated.

Visitors should not walk in these areas, which are marked by signs.

Find out more about Links of Noltland