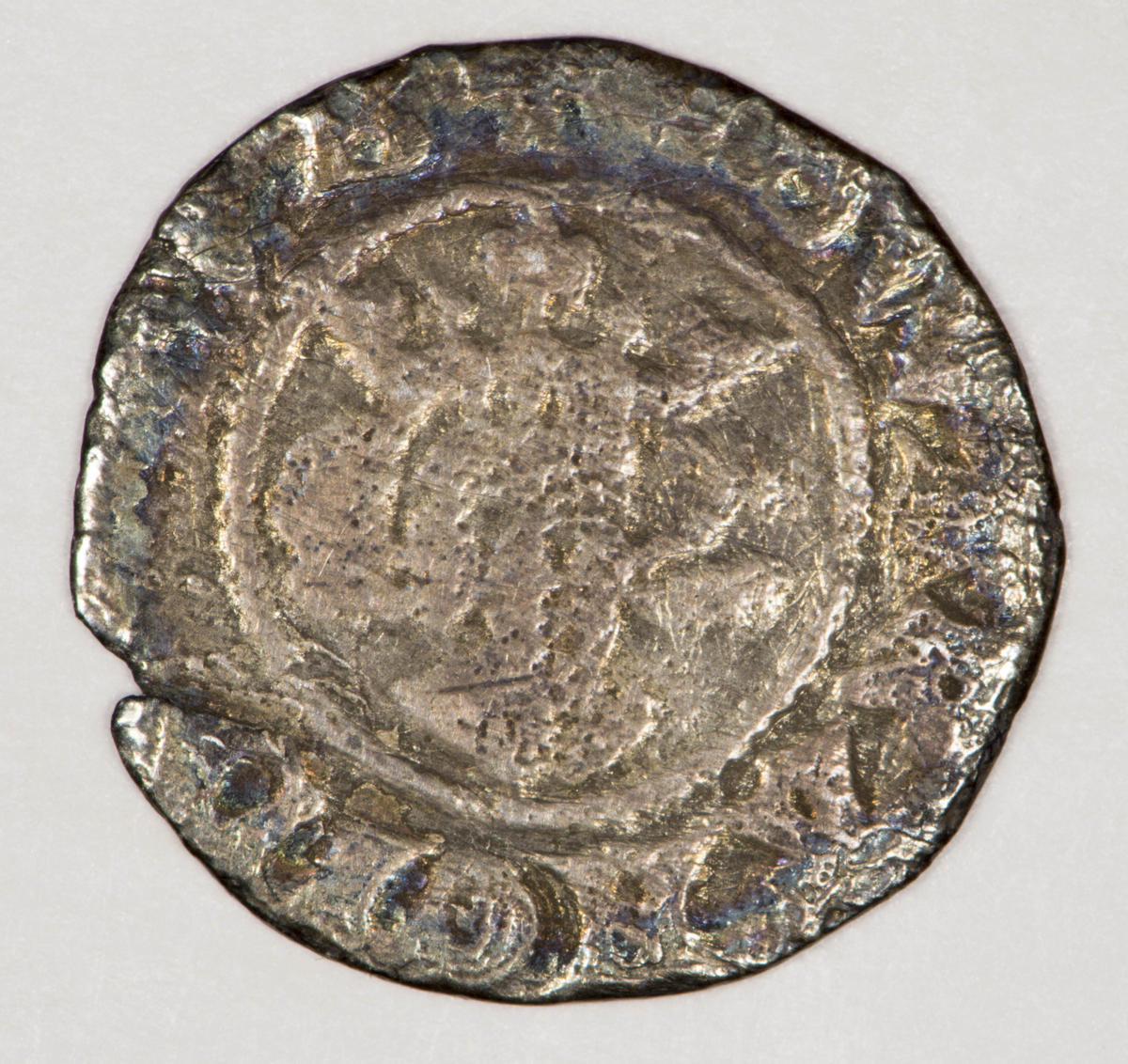 The obverse design of this coins consists of a crowned portrait of King Edward I, facing front, with the Latin lettering EDWR ANGL DNS HYB, at legend. This translates as: Edward King of England and Lord of Ireland.

A long cross with three pellets in each quarter is on the reverse. Here, the inscription reads the name of the mint.

This English silver penny is an example of medieval commerce. The recoinage that commenced during the seventh year of Edward I's reign established a format for the design of English coins that will lack any substantial change for many years. It should be noted that the practice of indicating the King's regal number on the coins was introduced by Henry III but was not continued by his successors: Edward I, Edward II and Edward III. This means that for almost a hundred years, all English pennies bore the name 'Edward' and their basic design remained the same. As a consequence, it is very difficult to determine the sequence of issue and to attribute the coins to one of the three Edwards.

The castle is situated on the Laich of Moray, a fertile plain that was once the swampy foreshore of Spynie Loch. This was originally a more defensive position than it appears today, long after the loch was drained.

The motte is a huge man-made mound, with steep sides and a wide ditch separating it from the bailey. The whole site is enclosed by a water-filled ditch, which is more a mark of its boundary than it is a serious defensive measure.

The ancestral seat of the earls of Moray

Duffus Castle was built by a Flemish man named Freskin, who came to Scotland in the first half of the 1100s. After an uprising by the ‘men of Moray’ against David I in 1130, the king sent Freskin north as a representative of royal authority.

He was given the estate of Duffus, and here he built an earthwork-and-timber castle. Freskin’s son William adopted the title of ‘de Moravia’ – of Moray. By 1200, the family had become the most influential noble family in northern Scotland, giving rise to the earls of Sutherland and Clan Murray.

In about 1270, the castle passed to Sir Reginald Cheyne the Elder, Lord of Inverugie. He probably built the square stone keep on top of the motte, and the curtain wall encircling the bailey. In 1305, the invading King Edward I of England gave him a grant of 200 oaks from the royal forests of Darnaway and Longmorn, which were probably used for the castle’s floors and roofs.

By 1350, the castle had passed to a younger son of the Earl of Sutherland through marriage. It may have been then that the keep was abandoned, possibly because it was beginning to slip down the mound, and a new residence established at the north of the bailey.

Viscount Dundee, leader of the first Jacobite Rising, dined in the castle as a guest of James, Lord Duffus in 1689, prior to his victory against King William II’s government forces at Killiecrankie. Soon after, Lord Duffus moved to the nearby Duffus House. The castle quickly fell into decay.

Find out more about Duffus Castle