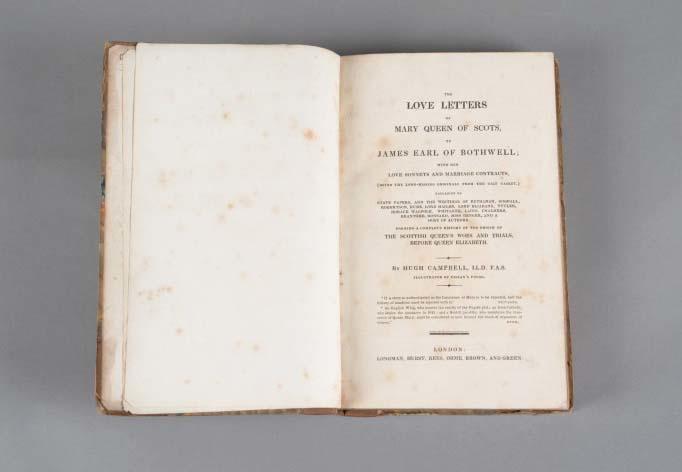 Book: The Love Letters of Mary Queen of Scots, to James Earl of Bothwell

Book: The Love Letters of Mary Queen of Scots, to James Earl of Bothwell

This book was published in 1825. It contains transcripts of letters and sonnets allegedly written by Mary Queen of Scots to James Hepburn, Earl of Bothwell. These are known as the ‘Casket Letters’, as they were found in a silver casket. The book also includes essays and discussions on the letters by various authors from the 16th – 18th centuries.

The Casket Letters were used against Mary. Those opposed to her claimed they contained evidence that she and Bothwell planned the murder of her second husband, Lord Darnley. Darnley was killed under mysterious circumstances and three months later Mary and Bothwell married. It was accepted at the time that Bothwell was responsible for Darnley’s murder. In one of the Casket Letters, written before Darnley’s death, Mary had agreed to marry Bothwell. This would suggest she was aware of the murder plot. However, many believe the letters were forged to frame Mary. It is possible that Mary was abducted by Bothwell and forced into marrying him and had no part in his scheming. The lack of reliable sources and blurring of history means we may never know the true story.

Whether real or not, the discovery of the letters led to Mary being imprisoned by Scottish rebels who opposed her reign. She was forced to abdicate the throne. Her son was crowned James VI of Scotland on 29th July 1567, just after his first birthday.