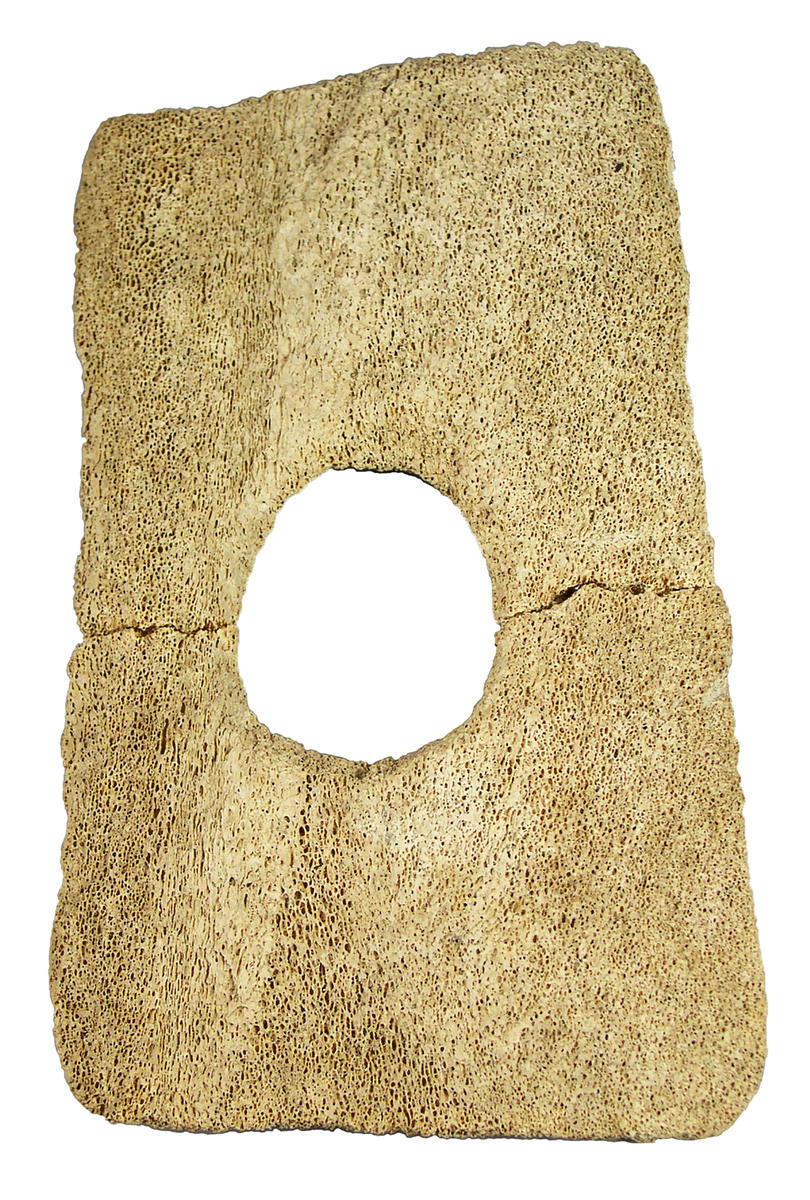 A rectangular slab from a sea mammal bone with a large circular hole at the centre. This bone tool, possibly used for scraping blubber, was made from the large bone of a dolphin or whale.

During prehistory, people collected bone from stranded carcasses of whales, porpoises and dolphins. In the largely treeless north and west, whalebone was used as a substitute for wood; it was strong, dense and resilient, and came in very large sizes. On loan courtesy of National Museums Scotland.

Skara Brae is remarkable because of its age, and even more so for the quality of its preservation. Its structures survive in impressive condition – as does, incredibly, the furniture in the village houses.

Nowhere else in Western Europe can we see such rich evidence of how our remote ancestors actually lived.

Skara Brae became part of the UNESCO World Heritage Site known as the Heart of Neolithic Orkney in 1999, in recognition of the site’s profound importance.

Skara Brae was originally an inland village beside a freshwater loch.

All of the houses were:

Each house has a single room, its floor space roughly 40sq m.

A larger structure at one end of the village has a special hearth and no box-beds, so may have been a workshop.

A rich array of artefacts and natural remains has been discovered during various archaeological excavations.

The villagers were farmers, hunters and fishermen who were able to produce beautiful and complex items using basic tools.

No weapons have been found and the village was not in a readily defended location, both of which suggest a peaceful life.

Most artefacts found here are on display in the Skara Brae visitor centre.

The end of village life

No one knows why village life seems to have ended around 2500 BC. Some argue that a huge sandstorm covered the houses. Others believe it was a more gradual process.

As village life was ending, new monuments were starting to appear on mainland Orkney. The most important of these are Maeshowe Chambered Cairn, and the impressive Ring of Brodgar Stone Circle and Henge and Stones of Stenness Circle and Henge.

Ongoing excavations at Links of Noltland, Westray and Ness of Brodgar are now revealing other settlements of a similar period to Skara Brae.

Find out more about Skara Brae