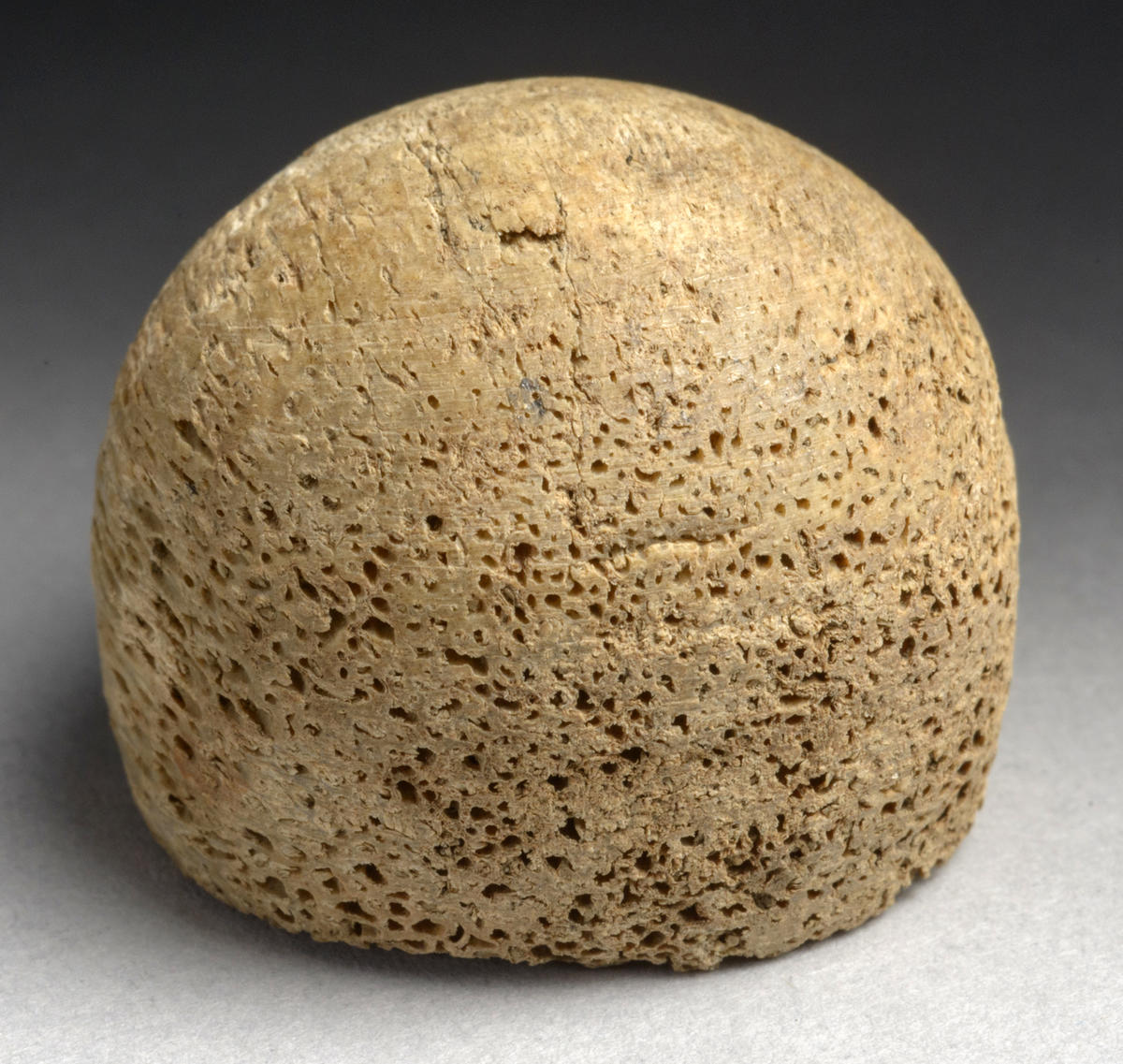 This bone object is thought to be a playing piece from a Viking board game called Hnefatafl. Similar to chess, the game was played from the 1100s onwards. The hemispherical counter was found in the grounds of Dirleton Castle. It is rare evidence of life before the fortress-residence was built in the 1200s.

Dirleton Castle is a one of Scotland’s oldest surviving strongholds. The 13th-century fortress was for 400 years a magnificent fortified residence to three successive noble families – the de Vauxs, Haliburtons and Ruthvens.

The Ruthvens’ eventual downfall saw Dirleton abandoned as a noble residence. Oliver Cromwell’s 1650 siege then rendered it unfit for military use. But the castle was not forgotten.

New owners the Nisbets bought the estate in the 1660s, turning the graceful ruins into an eye-catching feature in their new designed landscape. (They built a new mansion house, Archerfield, to live in.) Today, both castle and gardens are attractions in their own right.

The impressive cluster of towers dating from the 1200s is among the oldest castle architecture surviving in Scotland. These remnants from the de Vauxs’ time include the imposing keep at the south-west corner.

A remarkably similar castle can still be seen near Amiens in northern France. Dirleton’s builder, John de Vaux, had been a steward in the nearby household of Alexander II’s queen, Marie, daughter of the Duke of Coucy.

Crushed by the Hammer

The de Vaux castle suffered badly in the Wars of Independence with England that erupted in 1296. Dirleton was captured in 1298, on the orders of Edward I – ‘Hammer of the Scots’ – and then changed hands several times.

By 1356, Dirleton had a new lord, John Haliburton. He rebuilt the battered castle, adding a new residential tower and great hall along the east side of the courtyard. Even as ruins, the surviving Haliburton storage vaults, family chapel and grim pit prison give a good idea of lordly life in the later Middle Ages.

Having acquired the castle around 1510, the Ruthvens made some big improvements to Dirleton, despite their main residence being Huntingtower Castle.

The gardens that grace the castle grounds today date from the late 1800s and early 1900s.

The formal Victorian west garden – with its foliage plants and geraniums – was faithfully reconstructed in 1993.

Fragrant herbaceous borders greet you as you enter the estate. These belong to the beautiful north garden, which dates from the Arts and Crafts movement of the 1920s.

The garden has a rare ginkgo, or maidenhair tree, a species unchanged since the time of the dinosaurs.

Thought to be native to China, the gingko was introduced to Europe in 1730. Its leaves are unique: they have a distinctive double-lobed shape, giving the tree its proper Latin name Ginkgo biloba.

Ginkgos are long-lived and are very disease-resistant, surviving well in polluted cities. Ginkgo trees growing in Hiroshima survived the atomic bomb blast of 1945.

Find out more about Dirleton Castle