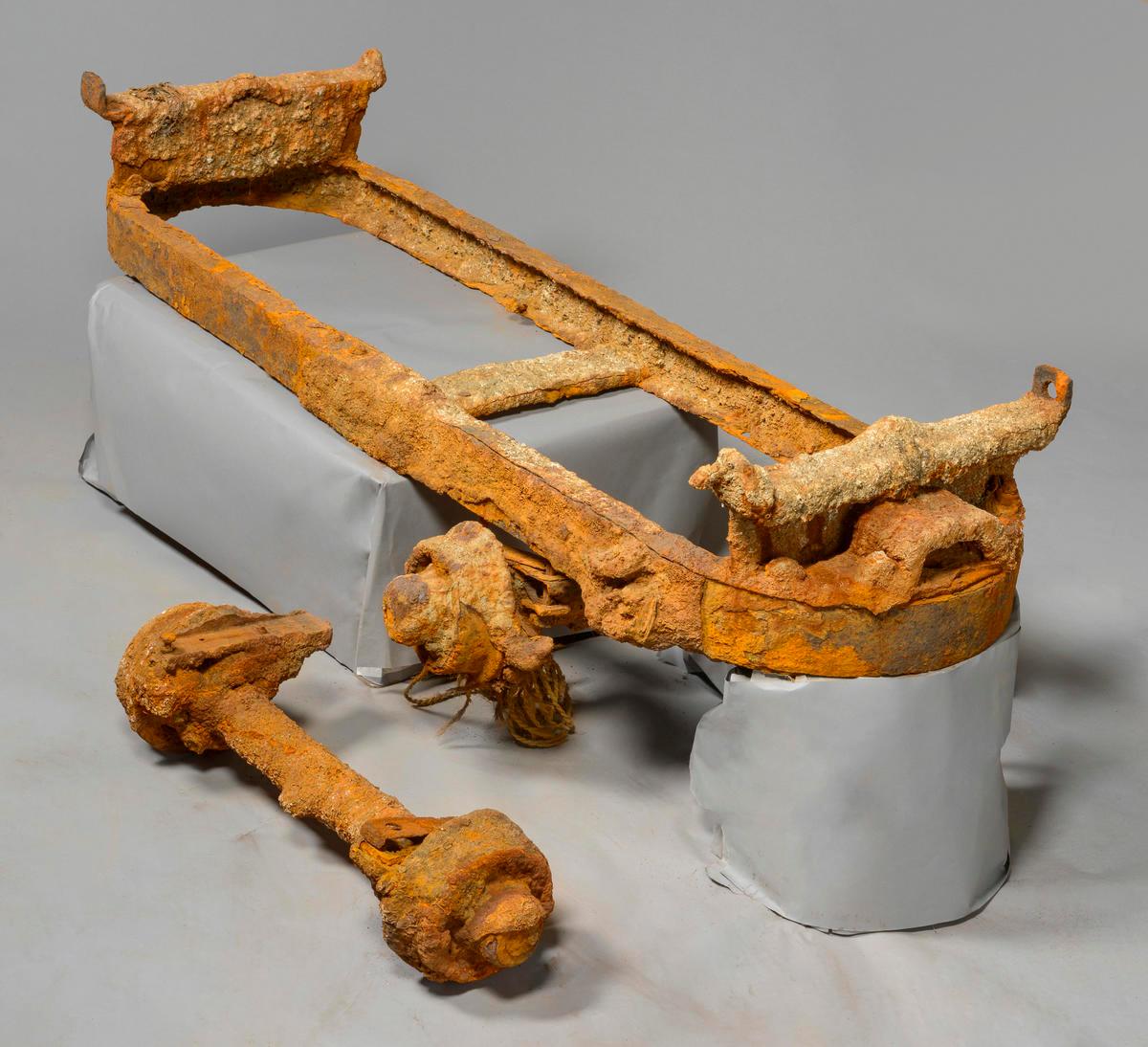 This 6ft-long wagon frame was lifted from the water at Inchcolm Island. Heavy materials were loaded into the wagon or ‘bogie’ and transported along a light railway.

Inchcolm is an island in the Firth of Forth with a long military history. It was fortified and armed for defence against the German Navy during both World Wars. The Royal Navy and merchant ships were moored a short distance away at Rosyth.

The wagon was likely used to move earth, concrete and brick around the island during its military upgrades in 1939. It may have been used after this to carry coal, water, or ammunition to the guns. When loaded the wagon could be easily pushed if the rail was flat. To travel up a slope, the wagon required a winch.

By 1943, the risk of German invasion had passed and the defences on these islands were slowly reduced. The guns on Inchcolm were finally removed in the 1950s.

Inchcolm means ‘Colm’s Isle’, yet the ‘Iona of the east’ has no known link to the living St Columba. A dramatically sited abbey complex – Scotland’s best-preserved group of monastic buildings – dominates the island.

The Augustinian canons settled here in the early 1100s, to enjoy the island’s peace and isolation. But Inchcolm’s Firth of Forth location also made it a target. English naval raids were common during the wars with England from the 1300s to the mid-1500s.

The brethren spent more and more time ashore in Fife, until the Protestant Reformation of 1560 finally brought monastic life to an end. Inchcolm continued to serve in the defence of the country right up to the Second World War.

The island’s remains testify to this history of conflict as well as the history of the medieval church in Scotland.

It’s said that the island retreat was home to a hermit before the foundation of the abbey. Inchcolm’s oldest relic is a 10th-century ‘hogback’ tombstone.

Alexander I sheltered here during a storm in 1123 and resolved to build a monastery in thanks for his life being saved. He died in 1124 before being able to keep his promise. So his brother, David I, invited Augustinian canons to establish the island priory. Inchcolm was raised to full abbey status in 1235.

The abbey church was enlarged to the east around 1265. In the 1400s, a new church was built, and an abbot’s residence created above the original church. The choir of the 13th-century church became the nave of the later church and is now mostly wall footings. But a striking fresco painting of a funeral procession, dating from the 1200s, survives in a tomb recess. Also remarkable are the stone screens dividing the choir from the nave.

The cloister is the most complete in Scotland, and three covered cloister walks survive. The octagonal chapter house dates from the 1200s. A fine warming room sits above it, and the dormitory, refectory and other rooms also survive. They are roofed – some more recently.

English ships attacked Inchcolm many times in the later Middle Ages, forcing the canons to desert the abbey for periods. Abbot Walter Bower found peace enough to write his great history of Scotland, Scotichronicon, from here in the mid-1400s, however.

The story of conflict continued even after the abbey’s demise. In 1795, during the Napoleonic Wars, a gun battery was installed when the French threatened to invade.

Inchcolm was heavily fortified in the early 1900s to help defend:

Find out more about Inchcolm Abbey