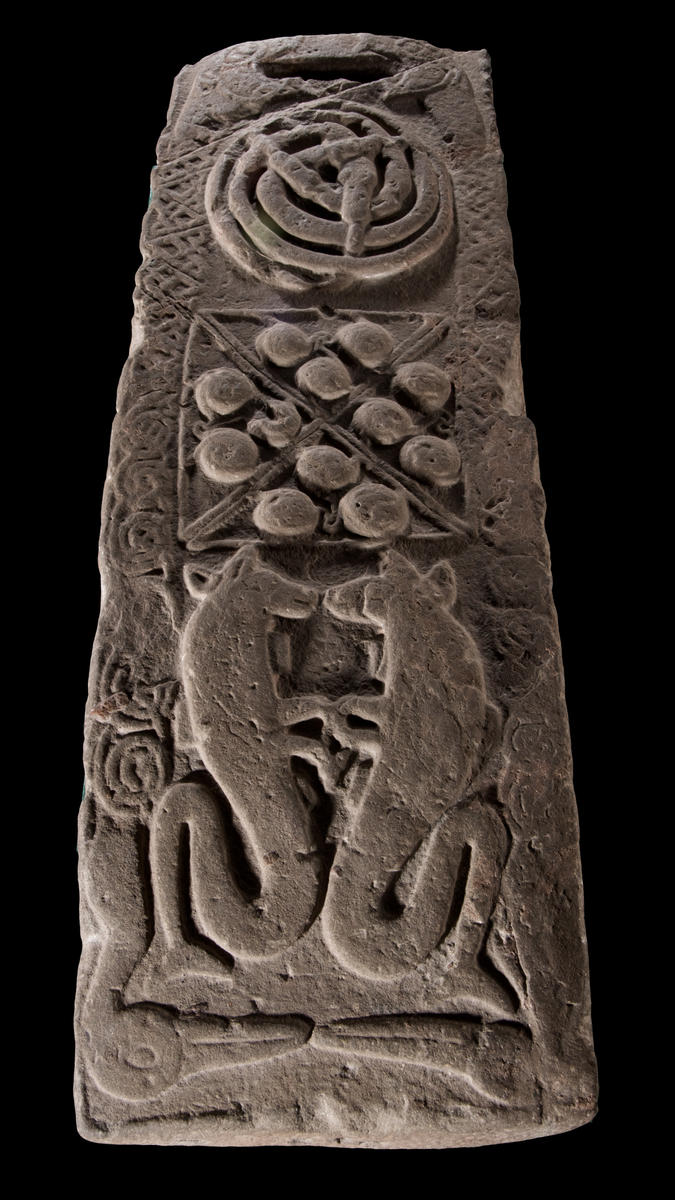 A socket at one end of this Pictish stone once supported a vertical cross, that stood at Meigle, Angus. This socket appears to be held by the open jaws of two carved beasts. At the foot of the stone is a pair of bird-headed monsters facing each other, the bodies of these and the two beasts forming a continuous border of interlaced-work along the two edges of the stone. Three serpents are intertwined around the border. The middle of the slab is a square divided by diagonals into four triangles, each filled in with three raised bosses of spiral-work. Next to the foot of the stone is a pair of seahorses facing each other, and their forelegs interlaced. On the left side of the stone is a panel containing a pair of beasts devouring or disgorging parts of the dead body of a man. In the middle of this are four men in a spiral formation grasping each other's feet with a beast resembling a bear and a horse, with its feet doubled up underneath the body. The right side is divided into three panels containing a beast like those on the other side and a beast with the head and wings of a bird with a crest or ear terminating in a barb forming a piece of interlaced-work with the creatures tail. In the middle is a square key-pattern, and next to the head of the stone, a group of five horse-men (three riding abreast in the middle, one in front, and one following behind) and two hounds. End: a beast with a human head and a long nose pursuing a naked man, who is looking back over his shoulder at the monster. This scene appears to represent the ' Monticora' or man-eating beast of the bestiary, a fabulous creature illustrated in a bestiary manuscript of the C13th in the British Museum as having the body of a beast and the head of a man. On display at Meigle Museum, Angus.